Algy just loved the burn. It took on so many different characters as it made its way from the rocky hillsides through the peat bogs to the sea, and it was constantly on the move. Even in the depths of winter it sparkled and shone, bringing the colours and light of the sky into the deep shade of the wee ravines which it had carved out for itself over the centuries. When Algy perched on its banks he felt that he could happily sit there for years, just watching the flow of the water and listening to the constantly soothing sounds that it made.

Listen to the sounds of the burn as it passed beneath Algy’s bush.

This is the sound of the burn as it made its way past Algy’s perch in the hazel bush on its banks.

Although the wind felt bitterly cold, it was a fine, bright day and Algy was in high spirits. Leaving the Sound behind him, he flew back up over the moorland, towards his home. The sparkling blue waters of the burn looked too pretty to pass by, so he found a perch in a hazel bush, and rested in the rare winter sunshine for a while. Algy was especially happy to see plenty of catkins on the bushes; spring was not very far away now!

As the sun sank down beyond the headland, beautiful coloured reflections appeared in the rock pools, rippling with the swell of the sea at the turn of the tide. Algy flew over to the rocks to get a better view, and perched there, quietly watching the water, until the light was gone.

The storm had passed over, and in its wake the wind had swung round to the north-east, bringing a sky full of colour for a change. It had been a long, long time since Algy last saw a sunset, so he perched on the low wall of the wee jetty on the Sound, and watched the coloured light playing across the water. He was thinking of all his friends who were facing the challenges of old age: those friends who were themselves elderly, and those who were caring for their elderly parents or other relatives or friends. Algy sends you all a very special fluffy hug, and offers you this famous piece of verse by Lewis Carrol to make you smile:

“You are old, father William,” the young man said,
“And your hair has become very white;
And yet you incessantly stand on your head —
Do you think, at your age, it is right?”

“In my youth,” father William replied to his son,
“I feared it would injure the brain;
But now that I’m perfectly sure I have none,
Why, I do it again and again.”

[Algy is quoting – from Alice’s Adventures in Wonderland – the opening verses of Lewis Carroll’s Father William, which parodies an earlier poem by Robert Southey.]

It was not hard to see that some very stormy weather was approaching. Algy didn’t feel like being swept out to sea again, so he left the exposed beach and flew across the peninsula to a sheltered spot on the Sound. The grasses on the foreshore did not exactly offer an inviting perch, as they were flattened and sodden from their recent pounding by the winter storms. But Algy couldn’t resist sitting there for a while, despite the dampness and discomfort, as he was fascinated by the constantly changing reflections of the sky in the deep pools of the salt marsh. 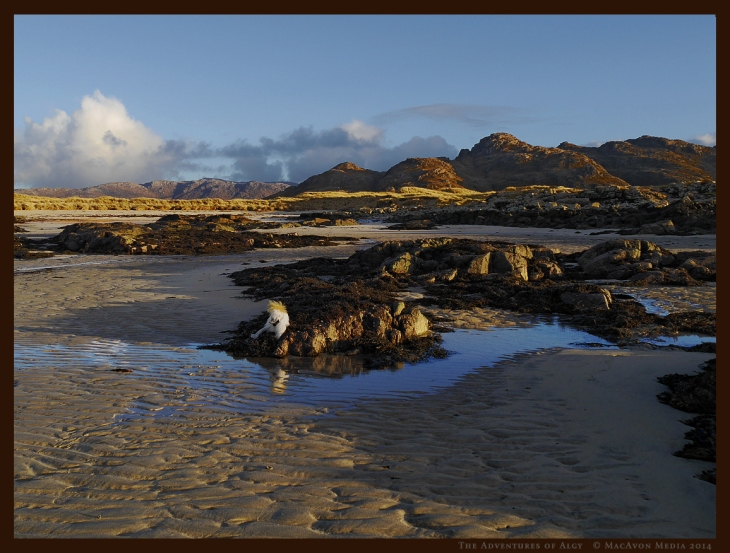 On 25th January, Scots traditionally hold a supper to celebrate the life and works of the national bard, Robert Burns. Today, Algy was thinking particularly of his friends in northern America who are suffering from an exceptionally severe winter, so he decided to recite one of his favourite and most appropriate Burns poems: Up in the Morning Early.

Algy wishes you all a happy Burns Night, and hopes that you will very soon see the spring, and feel like getting up in the morning early again 🙂

Cauld blaws the wind frae east to west,
The drift is driving sairly;
Sae loud and shill’s I hear the blast,
I’m sure it’s winters fairly.

The birds sit chittering on the the thorn,
A’ day they fare but sparely;
And lang’s the night frae e’en to morn,
I’m sure it’s winter fairly.

For anyone unfamiliar with the sound of the Scots language, Algy recommends these readings of the poems.

[Robert Burns wrote in the language of Lowland Scotland, Scots or Lallan, which is an ancient form of the English language, but is not related to Gaelic.]

Although Algy is very fond of sea shells, counting them proved to be harder than he had expected, so he decided to go and look for tiddlers instead. He knew that the tiny fish loved to dart in and out of the shadows of the quiet burn that trickles slowly from the peat bogs through the sand dunes to the sea. So Algy found a sheltered spot by one of the many calm pools in the burn, and settled down to watch. It was very peaceful, but – as he quickly discovered – it was also distinctly soggy beneath the tail feathers if you sat there for any length of time…

When the tide swept in, Algy retreated to a drier part of the beach close to the dunes, with the intention of trying to count the sands as The Man in the Wilderness had asked. But above the tide line he found a wonderful area of reddish-coloured shells, which had been washed together by a recent surge tide to form an isolated patch on the sand. Algy decided that it would be much more interesting to count the shells instead – or perhaps just to look at them for a while …

Algy decided to try to find out for himself how many blackberries grow in the sea. He got as close as he could to the ocean without actually immersing himself in it, but there was no sign of any blackberries… Of course the water was very shallow over that part of the beach at low tide, which might explain why nothing was growing there – or perhaps it was simply because it was the middle of winter 🙂

But Algy didn’t really mind; the sun was shining, and the low afternoon light looked so lovely on the water that he just leaned back and enjoyed the beautiful view, for as long as the incoming tide would allow.