Algy’s adventure for the PWS Halloween special. This is what Algy found when he explored that special forest referred to in the posts of certain PWS members recently 🙂 So he decided to look the other way!

Have a happy, spooky, magical Halloween everybody xoxo

Thank you for this super-spooky (but nevertheless fluffy) Halloween GIF. Did you know that the word “Halloween” means “hallowed evening” or “holy evening” and comes from a Scottish term for All Hallows’ Eve (the evening before All Hallows’ Day)? What a coincidence… Or is it really?

Algy is thrilled to be a part of the PWS Halloween event, thank you xoxo

Have a happy and fluffily spooky Halloween tonight, everybody 🙂

It is indeed All Hallows’ Eve, and also the ancient Celtic festival of Samhain, marking the beginning of the very darkest part of the year here in the northern Celtic lands. The two festivals combined have created the Halloween we know today 🙂

October 30, 2015 Posted in The Adventures of AlgyLeave a comment

Algy is very sad that Tumblr have today removed the speech bubble which enabled comments on posts (except reblogs). He doesn’t know why they did it – and he certainly does not consider that the new email feature is a substitute in any way.

So he’s very sorry, but unless Tumblr can be persuaded to reinstate a commenting feature, Algy won’t be able to leave nice comments on your posts any more. After years of commenting (and receiving many lovely comments himself), this is a very serious loss, and will make Tumblr a sadder place :{

if anyone knows how to get the commenting function back, please tell Algy!

Update: some kind Tumblr friends have written to Algy to say that the reply bubble (or its equivalent) will be back soon. He hopes they are right! This is what Tumblr say:

“What happened to post replies? You’re really asking about the button to make a reply, since the old
ones are still there in post notes where they will live forever and
ever. The button itself went away to make room for something much better
coming soon.” 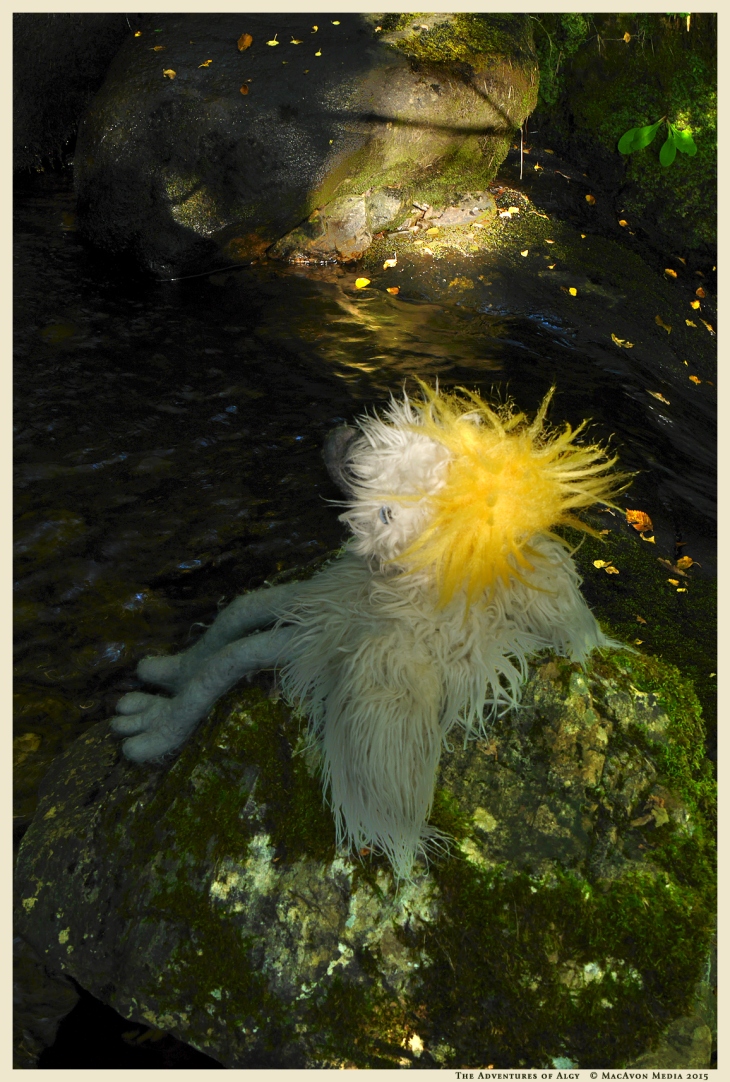 After his adventure with the magic toadstool, Algy felt in need of a nice long drink of fresh water, so he flew to a wee woodland pool that he knew, at the foot of a waterfall that tumbled down the hillside through the trees. It was very peaceful perching on a rock by the water, and he rested there for some time, just listening to the water and watching the flickering patches of light that filtered through the trees. 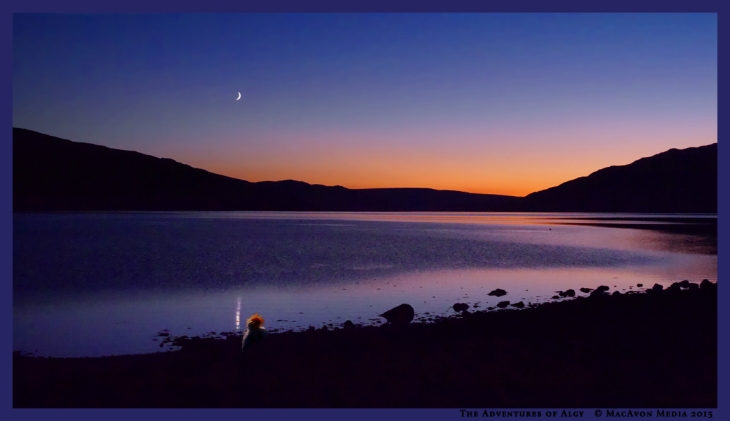 Night was falling. Algy was feeling a little less dizzy now, so he decided to start making his way home before it got too dark to see his way. Turning his back on the great sea loch, he flew quickly through the long pass, and down onto the shores of the quiet loch. A new moon was slowly sinking into the last remains of the sunset, and everything was calm. It was an unusually beautiful evening…

Algy moved to a perch in the bushes by the shore of the loch, and gazed into the fading sunset. Although he was no longer spinning, the world still seemed to look a wee bit strange, but the effect was very pretty, so Algy just sat back and enjoyed the show 🙂

Algy came down to earth with a sudden bump, landing flat on his tail feathers… on a prickly bramble. He was very relieved that the spinning had stopped at last, but where had the forest gone? And didn’t the world look a wee bit strange? There was something slightly unusual about the colours, maybe…

Take good care of yourselves, everybody, and don’t be as foolish as Algy 🙂
He wishes you all a safe and happy weekend xoxo

October 24, 2015 Posted in The Adventures of AlgyLeave a comment

Algy is thrilled to hear that the tradition of the Highland Games is preserved in the Scottish diaspora overseas 🙂 And he is sure you will be glad to know that here in Scotland the Highland Games are still major events all over the country, enjoyed by both locals and visitors. About 100 different Highlands Games and Gatherings are officially listed each year, taking place between May and September with the majority in July and August – in both the Highlands and the Lowlands. The Games vary from huge, well-publicized events with large pipe bands and serious competitions for Highland dancing, caber tossing, etc., to very small but enjoyable gatherings in remote communities, which do not appear in the official list. So the answer is Yes! 🙂

Here is the official guide to the Highland Games of 2015, but it does not include the many smaller local gatherings.

Although he knew perfectly well that he shouldn’t, Algy could not resist taking just a wee tiny bite of the glowing toadstool. No sooner had he swallowed it than the forest began to spin round and round, with Algy at its centre. He fell back helpless on the soft forest floor, unable to do anything except watch the whirling trees and strange colours…

As Algy reached out for the tempting fungus, it started to pulse with a glowing light. It was quite hypnotic, and he began to wonder whether he could remain awake long enough to try nibbling a wee bit of it…