… will be an exceedingly busy time for Algy, as he is overseeing the final stages of production for his very first book “A Surprisingly Fluffy Bird”.

Algy is very sorry about this – he hates to miss your posts, and he likes to post adventures every day. But his assistant is only a feeble human, and she can’t quite manage to do everything at once.

So Algy hopes that you will forgive him. If he doesn’t “like” or comment on your posts quite as often as usual, it doesn’t mean that he has forgotten you – he’s just very busy!

But this won’t last long, and then things will return to normal 🙂

UPDATE: Algy apologises most sincerely for his intermittent
appearances on Tumblr at the moment. His book is very nearly ready for
publication… not much longer now 🙂 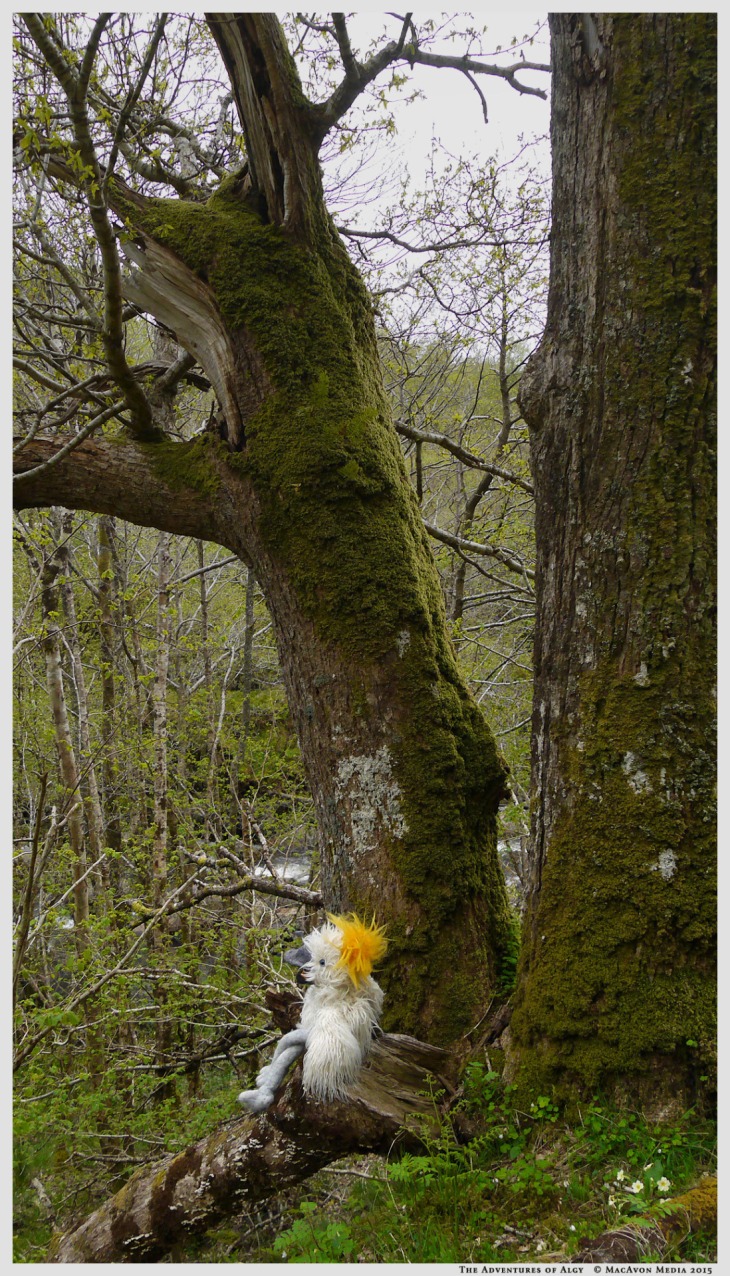 Algy flew a few miles further south, following the shoreline of the great sea loch until he reached a different sort of woodland. Here he found a spot where a fast, rushing burn swept tumbling through between the trees at the foot of a steep, wooded hillside. Many of the trees were fresh and young, but some were very old, battered and torn by the wind and the weather over the course of the years. Here and there, pretty clumps of primroses were still in flower, and Algy was pleased to see that there were even a few wild violets. He found himself an excellent perch on a massive fallen branch, and sat there for a while, watching a tiny treecreeper flitting from tree to tree down by the burn, and creeping up the trunk of each one.

(This post is especially dedicated to Algy’s Canadian friend aboyningphotography.) 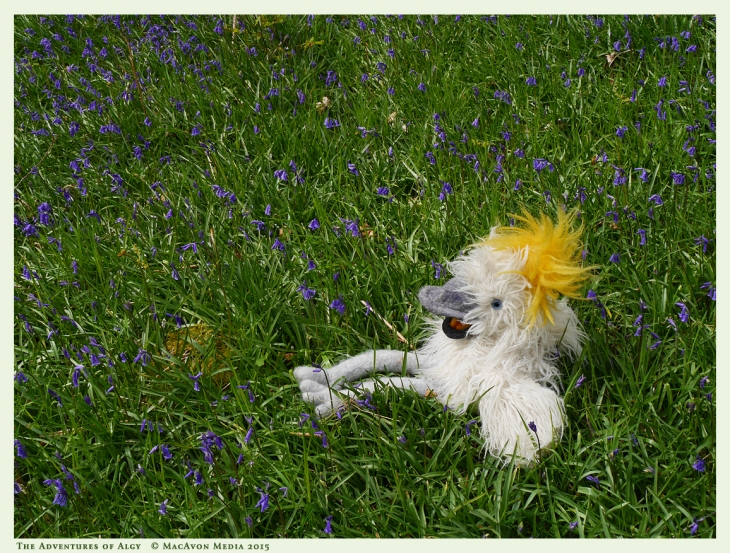 The weather was still horribly cold for the time of year: it would soon be June, and there was still no hint of warmth. Some folk were saying that it was the coldest May in the West Highlands that they could ever remember. But Algy was fluffy enough to keep warm, so he felt happy sitting among the bluebells, at least when it wasn’t raining too hard.

Algy hopes that you will all find a pleasant spot among the flowers this weekend, and he sends fluffy thanks and special fluffy hugs to all the kind friends who commented on his previous post from the bluebell wood xoxo 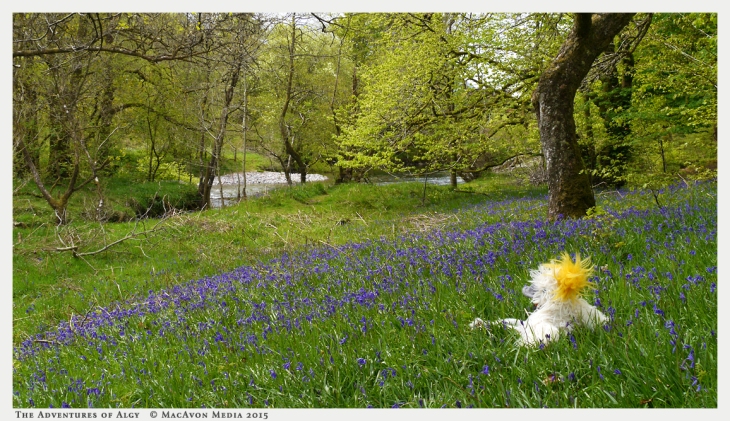 Close by the river, Algy discovered a large swathe of wild bluebells, just coming into flower. He found a perch in the middle of the fragrant blue carpet and sat there very quietly, just listening to the spring sounds of the woodlands. There were many birds singing in the trees, and he was reminded of a poem by Yeats:

I have heard the pigeons of the Seven Woods
Make their faint thunder, and the garden bees
Hum in the lime-tree flowers; and put away
The unavailing outcries and the old bitterness
That empty the heart.  I have forgot awhile
Tara uprooted, and new commonness
Upon the throne and crying about the streets
And hanging its paper flowers from post to post,
Because it is alone of all things happy.
I am contented, for I know that Quiet
Wanders laughing and eating her wild heart
Among pigeons and bees, while that Great Archer,
Who but awaits His hour to shoot, still hangs
A cloudy quiver over Pairc-na-lee.

[Algy is quoting the poem In the Seven Woods – the opening verse in the book of the same name – by the late 19th/early 20th century Irish poet William Butler Yeats.]

Algy crossed the great sea loch and headed for the woodlands at the foot of the mountains.There was a particular spot by the river where he liked to perch and watch the water flow. The weather was feeling very moody, and Algy was not entirely surprised to see some fresh snow on the mountain tops, even though it was now the third week of May. 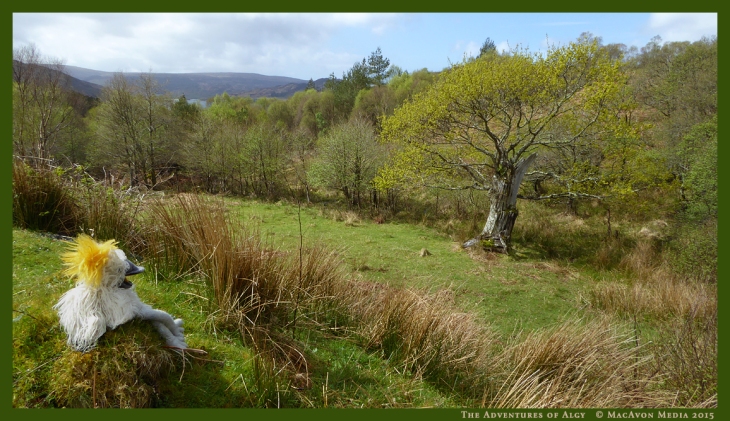 Algy flew on until he reached one of his favourite trees: a massive old storm-damaged oak, which stood alone in a clearing apart from the other trees. It was just coming into leaf, and the new leaves glowed yellow when the sun managed to break through the clouds. Although it was very late this year, Algy knew that spring had definitely arrived once the Atlantic oak trees burst into their distinctive yellowish green. As he looked at the tree he was reminded of a haiku by Basho:

[Algy is quoting a haiku by the 17th century Japanese master Matsuo Basho in a translation by Robert Hass.] 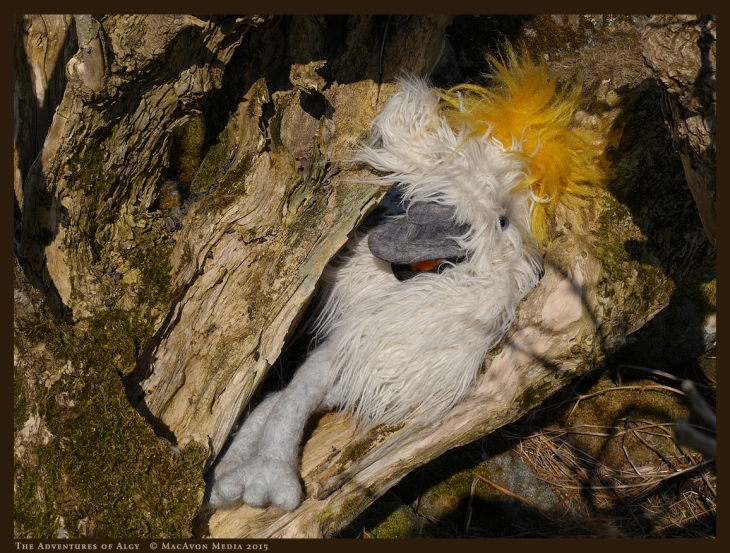 Algy was tagged by his sweet friend ultranireliauniverse in a “selfie-in-the-morning-without-make-up” challenge – so here is a photo of Algy just waking up in the morning, having spent the night in a temporary perch away from his home tree. He is definitely without his make-up – in fact he hasn’t even washed his face or cleaned his teeth yet 🙂

Algy perched on the steep banks of the loch side and looked down into the blue water below. The first fresh stems of bracken were emerging around him, but had not yet unfurled. Other hints of green were beginning to poke through the russet-coloured bed of last year’s leaves and bracken too, but the colours of autumn still dominated the scene. It certainly felt remarkably cold for the middle of May, and the heavy showers that swept across the loch from time to time carried ice in them. It was undoubtedly an unusually cold spring, Brrrrrrrr…

Algy hopes that you will all have a happy weekend, even if the weather is not as kind as you would like it to be 🙂 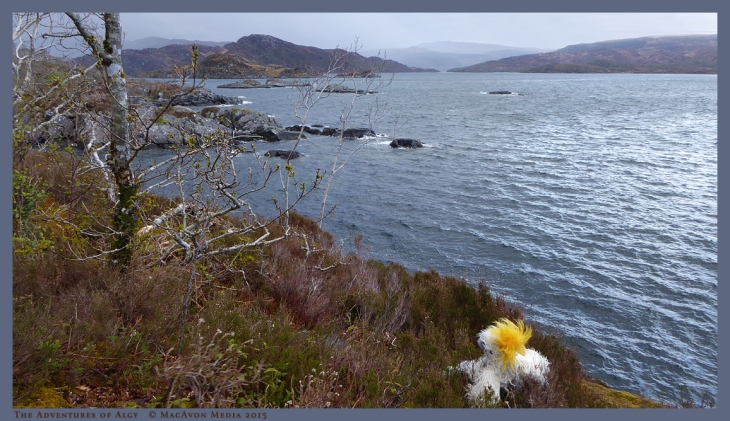 So Algy set out to investigate the progress of spring in the West Highlands. He flew up the lochside, and paused to rest in a patch of heather. There was very little sign of green anywhere, and many trees had not yet come into leaf. Spring was indeed exceptionally late this year, and – in this spot at least – it was difficult to believe that it was actually the month of May. 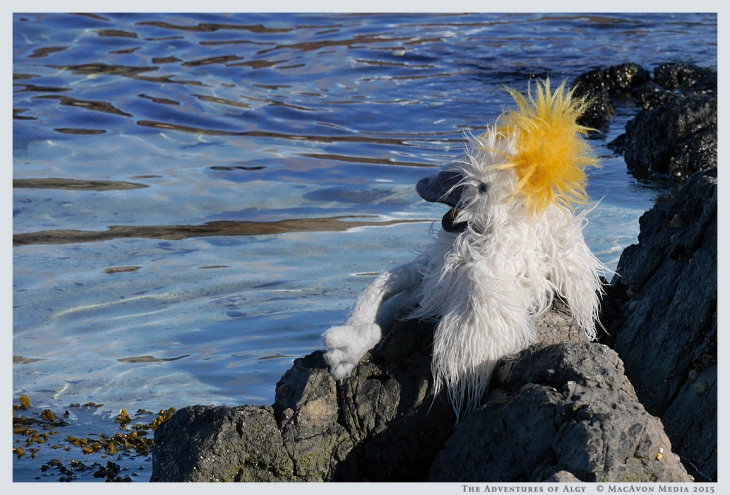 Algy had decided that it would be best to leave the final stage of production work on his book to his assistants. He reckoned that he had played his part, and now he deserved a rest 🙂 So he perched on a rock by the water, and made plans for a wee spring adventure. He wanted to see the woodlands and flowers, the hills and the lochs, and all the colours of spring.

As he sat there gazing at the clear water, he thought about the extraordinary process of writing books, and remembered a poem, which he dedicates to all his friends who have ever engaged in the strange business of writing:

Cervantes was asleep when he wrote Don Quixote.
Joyce slept during the Wandering Rocks section of Ulysses.
Homer nodded and occasionally slept during the greater part of the Iliad; he was awake however when he wrote the Odyssey.
Proust snored his way through The Captive, as have legions of his readers after him.
Melville was asleep at the wheel for much of Moby-Dick.
Fitzgerald slept through Tender Is the Night, which is perhaps not so surprising,
but the fact that Mann slumbered on the very slopes of The Magic Mountain is quite extraordinary—that he wrote it, even more so.
Kafka, of course, never slept, even while not writing or on bank holidays.
No one knows too much about George Eliot’s writing habits—my guess is she would sleep a few minutes, wake up and write something, then pop back to sleep again.
Lew Wallace’s forty winks came, incredibly, during the chariot race in Ben-Hur.
Emily Dickinson slept on her cold, narrow bed in Amherst.
When she awoke there would be a new poem inscribed by Jack Frost on the windowpane; outside, glass foliage chimed.
Good old Walt snored as he wrote and, like so many of us, insisted he didn’t.
Maugham snored on the Riviera.
Agatha Christie slept daintily, as a woman sleeps, which is why her novels are like tea sandwiches—artistic, for the most part.
I sleep when I cannot avoid it; my writing and sleeping are constantly improving.

I have other things to say, but shall not detain you much.
Never go out in a boat with an author—they cannot tell when they are over water.
Birds make poor role models.
A philosopher should be shown the door, but don’t, under any circumstances, try it.
Slaves make good servants.
Brushing the teeth may not always improve the appearance.
Store clean rags in old pillow cases.
Feed a dog only when he barks.
Flush tea leaves down the toilet, coffee grounds down the sink.
Beware of anonymous letters—you may have written them, in a wordless implosion of sleep.