The sunshine lasted only a few hours, and by the next day the Scotch mist had descended again and the world had vanished once more. With such a dense, wet blanket blocking out the sky, and such a pale sun as there was behind the mist barely managing to rise above the horizon, the day was dismal at best… and exceedingly damp. But when Algy wandered around his assistant’s garden, wondering what to do with himself in endlessly miserable weather, he was delighted to see that the first snowdrops of the year were starting to flower, like a few scattered lights emerging cautiously from the darkness. As he gazed at the tiny flowers in the dim, dark depths of winter, Algy was reminded of a poem written many years ago… by a Bishop…

Flower of the Snow!—we hail thy birth,
Though cold and pale may be thy shrine,
A promise from all bounteous earth
To glad our northern clime.
Thou com’st to soothe us, star-like flower!
To check our dark despair;
And in the dim and wintry hour
To whisper God is there.
Sweet gem!—how like a faithful friend
Dost cheer our lonely hearth,
And, mid the world’s unkindness, lend
Thy light around our path.

Algy dedicates this post, and his first snowdrops of the year, to his special friends who understand only too well the need to check that dark despair…

[Algy is quoting the poem To The Snowdrop by the 19th century English writer and cleric, Edward Henry Bickersteth, Bishop of Exeter, who is mainly remembered for writing the lyrics of some famous Christian hymns, such as Lead, Kindly Light and Nearer, My God, to Thee.]

After a thoroughly dismal weekend, Monday morning dawned bright and cold. It was wonderful to see the sun, but the bitter north-west wind was less welcome, and it felt very chilly. Although it had rarely dropped much below freezing, it had been persistently cold for many, many weeks. The spring flowers were late this year, but Algy could see that the snowdrops in his assistants’ garden had opened at last, and their heads were nodding prettily in the wind. So he crawled in among them, on the damp mossy ground under the dry, coppery leaves of the beech hedge, and stretched himself out happily in the sunshine, hoping that it would last for a wee while… 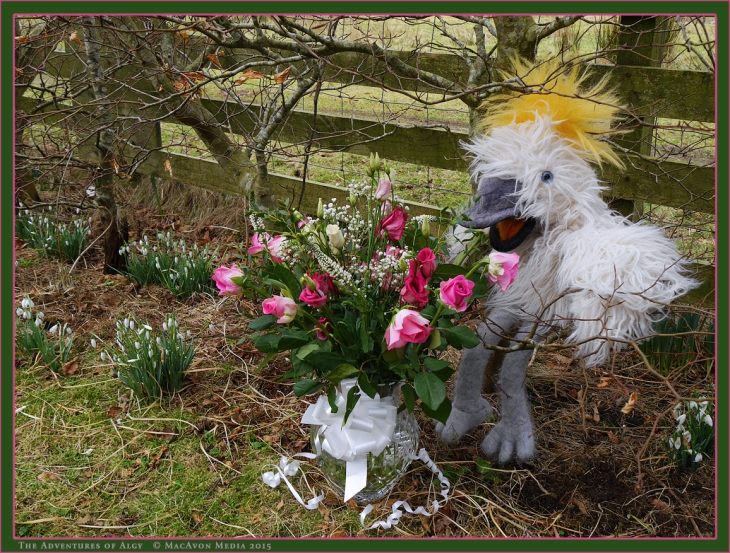 Algy was carrying a large bouquet of flowers, to share with you all at his Fluffy Valentine’s Day Party today on lovefromalgy – but the bouquet was very heavy for a fluffy bird, so he was relieved to find a low branch to rest on for a wee while among the snowdrops.

Algy sends you all lots of love and fluffy hugs today, and invites you all to come to his party on lovefromalgy – or send your fluffy friends to join in the fun 🙂 There are lots of flowers for everyone, and always room for a few more if you have some to spare xoxo

Algy wanted all his friends to have flowers on Valentine’s Day, so he looked around to see what he could find. The snowdrops were flowering in his assistant’s garden, but he didn’t think it would be right to pick them. Inside the porch he found a broken hyacinth stem covered in fragrant pink flowers, so he lifted it carefully to give to his hyacinth-loving friends, such as funnyful 🙂 He still needed to find some more flowers though…

Algy will be holding his special Valentine’s Day party tomorrow on his sideblog lovefromalgy – to make quite sure that all his friends get flowers and fluffy hugs, and no-one is left out. Algy heard that some people didn’t approve of Valentine’s Day, but he thinks it’s an excellent opportunity to make sure that everyone knows that they are appreciated and loved – and that they all get some pretty flowers to brighten up the end of the winter!

So Algy says please forget about all the commercial nonsense – and don’t worry about romance… just join him tomorrow to share some love, flowers, and fluffiness 🙂

Submissions invited today and all day tomorrow – please use the lovefromalgy submission form – or send Algy a link to one of your own posts to reblog. Beautiful flowers and fluffy friends are especially welcome xoxo

Unlike in the southern parts of the UK and mainland Europe, it was not a lovely, warm and sunny spring day in the West Highlands, but a dismal, cold, damp and depressing sort of day. But at least the wind had died down, and Algy was determined to make the best of it, so he found a spot among the snowdrops in his friends’ garden, beside the very first daffodils of the year, and settled down to read.

This is especially for Algy’s friend Anna annaaslund in Sweden, who has been “looking forward to a picture of Algy in the middle of some snödroppar very soon”, and for his friend Guido guisch73, who told Algy “they are called Schneeglöckchen” in Germany: little snow bells – what a lovely name 🙂

And it is also for all Algy’s friends in the frozen north of America and Canada – he hopes very much that you will see your own spring flowers very soon, and although it is no longer February, he is sure you will say:

[Algy is reading the poem The Snowdrop by Alfred, Lord Tennyson.]

The strong south-westerly wind was bringing slightly milder weather as it rushed and sighed through the trees. Algy perched in a sheltered bush, above the nodding heads of the first snowdrops of the year, and looked through a book of verse while the other birds practised their songs for the coming spring.