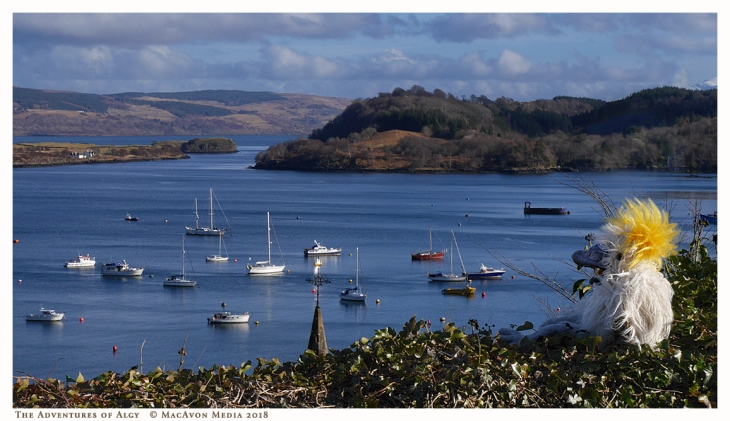 And so, finally, the ferry boat ground to a halt, and after some protracted rumbling and shaking, the din of the many noises it made subsided too. Looking down towards the lower deck, Algy saw that the crew member who had beckoned to him on the other side of the water was waving at him again, apparently now wishing him to disembark. Algy fluttered unsteadily off the boat, and landed as soon as possible on the concrete slipway, feeling decidedly wobbly.

Looking around, he discovered that he had arrived at one side of a very pretty circular bay. He could see at once that there was much to discover and explore, but he felt rather peculiar, and decided that perhaps he should take a wee bit of time to steady himself first, as the ground seemed to be going up and down beneath him in a most unusual way. Getting to his feet, Algy tested his wings carefully, to make sure that he could fly in a reasonably straight line, then lifted himself slowly into the air and rose a short distance up the hillside which climbed very steeply above the water. Flying vertically upwards seemed to be much more of an effort than usual, so he stopped at the earliest opporunity, alighting on a low, ivy-covered wall which seemed to provide both a comfortable perch and a fine view of the bay. Settling himself down to rest, Algy gazed out at the scene in front of him. Apparently he had arrived in a picture postcard…

It was too altogether too slimy on the jetty, as well as being uncomfortably exposed to the wind, so Algy hopped over to a grassy patch on the foreshore and tucked himself down behind a large orange buoy. Dark showers were sweeping across the sky at regular intervals, but in between the downpours the sun lit up the world with a beautiful, stormy light, and Algy decided to watch it until the next icy squall swept in from the sea…

It was too altogether too slimy on the jetty, as well as being uncomfortably exposed to the wind, so Algy hopped over to a grassy patch on the foreshore and tucked himself down behind a large orange buoy. Dark showers were sweeping across the sky at regular intervals, but in between the downpours the sun lit up the world with a beautiful, stormy light, and Algy decided to watch it until the next icy squall swept in from the sea…

[This post is especially dedicated to Algy’s friends Fern @qbn-scholar and Pete @tvoom 🙂  Thinking of a past “In Conversation” critique which Algy watched, Algy wonders whether his friends will be bothered by the wee piece of turquoise rope, which could have been “cloned” out, and what they will think of the startling orange buoys… 🙂 ] 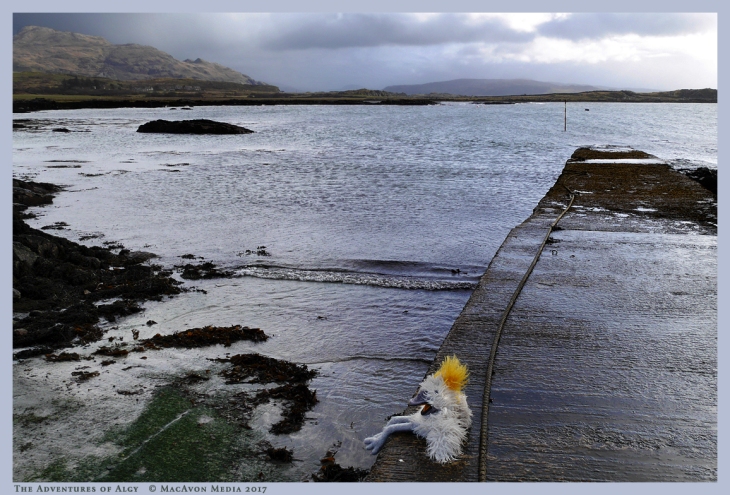 It was low tide, more or less. Algy flew over to the jetty where the humans did things with boats, perched cautiously on the cold, slippery surface, and turned his back to the freezing wind. It was rather a slimy spot, so Algy didn’t think that he would care to stop there long, but he liked to watch the shimmering light on the shallow water and wet sand… 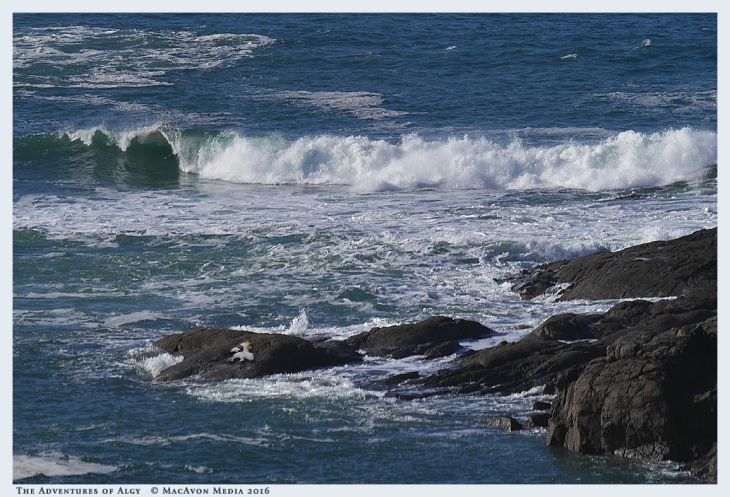 There was a fierce and bitter north-east wind howling across the headland, and the temperature was only just above freezing, but the sea was a beautiful sea-green-blue, and the surf was a dazzling white. So Algy flew out to a rock just off shore and flattened himself against the cold stone to shelter from the wind. As the waves surged and crashed all around him in the early spring sunshine, he thought of one of his favourite sea poems:

It keeps eternal whisperings around
Desolate shores, and with its mighty swell
Gluts twice ten thousand Caverns, till the spell
Of Hecate leaves them their old shadowy sound.
Often ‘tis in such gentle temper found,
That scarcely will the very smallest shell
Be moved for days from where it sometime fell.
When last the winds of Heaven were unbound.
Oh, ye! who have your eyeballs vexed and tired,
Feast them upon the wideness of the Sea;
Oh ye! whose ears are dinned with uproar rude,
Or fed too much with cloying melody—
Sit ye near some old Cavern’s Mouth and brood,
Until ye start, as if the sea nymphs quired!

Algy hopes you will all have a happy weekend, even if it is still very cold in your area, and perhaps some of you will be lucky enough to feast your eyes upon the wideness of the sea 🙂

[Algy is quoting the poem On the Sea by the early 19th century English poet John Keats.]

The season had definitely changed. When Algy woke up in the morning he felt a new but only-too-familiar chill in the air, and he found that the wind had developed extra teeth. It was undoubtedly autumn… but despite a very wet morning, the sun came out in the afternoon, so Algy hurried down to the beach, to watch the sea in its autumnal mood and to listen to the new sounds of the changing season as the strong south-westerly whistled through his feathers, blowing all the warmth of summer far away.

Algy leaned back on a flat rock, staring out at the sea. The wind was howling through his feathers again, and much of the time it was raining. It seemed as though there had been nothing but grey skies, wind, and rain, sleet or hail for months and months and months, and he wondered whether it would ever stop. Although the West Highlands was notorious for such weather, there were usually some periods of calm and sunshine; Algy could not remember such a persistently stormy winter before. As he gazed out into the west, he remembered the opening verse of a poem:

I seem to lie with drooping eyes,
Dreaming sweet dreams,
Half longings and half memories,
In woods where streams
With trembling shades and whirling gleams,
Many and bright,
In song and light,
Are ever, ever flowing;
While the wind, if we list to the rustling grass,
Which numbers his footsteps as they pass,
Seems scarcely to be blowing;
And the far-heard voice of Spring,
From sunny slopes comes wandering,
Calling the violets from the sleep,
That bound them under snow-drifts deep,
To open their childlike, asking eyes
On the new summer’s paradise,
And mingled with the gurgling waters –
As the dreamy witchery
Of Acheloüs’ silver-voiced daughters
Rose and fell with the heaving sea,
Whose great heart swelled with ecstasy –
The song of many a floating bird,
Winding through the rifted trees,
Is dreamily half-heard –
A sister stream of melodies
Rippled by the flutterings
Of rapture-quivered wings.

Algy dedicates this post to all his friends who feel that they are caught in a winter that will never end, whether they are buried in snow, or battered by constant gales and rain xoxoxo

[ Algy is quoting the first verse of the poem Music by the 19th century American poet James Russell Lowell. ]

It was the first day of March, and although it did look like March, it most certainly did not feel like it. Wave after wave of battering hailstones were sweeping in from the Atlantic on a gale-force wind, riding on massive black clouds, and although there were some fine sunny spells at times, they were exceedingly brief. Algy perched on the edge of the dunes, eager to test the drying effect of the wind on wet feathers, but he could barely manage to avoid being blown away to Iceland, never mind being blown dry…

Algy perched on a seaweed-covered rock towards the northern end of the beach, and stared at the sand: tiny, pointy sand mountains had popped up in a wide swathe across an area where the water didn’t quite drain away at low tide. Algy knew that this must mean that there were marine worms living underneath, but in that case he couldn’t understand why it didn’t always look like this when the tide was out. In fact, he had never seen it look quite like this before. He couldn’t ask the worms, as they were very shy and always remained underground, so he just sat there wondering – about this, as about so many aspects of life, the universe, and everything (sorry, Mr. Adams, but Algy really does wonder…) until, after a while, the tide gently swept back in and put an end to his bewilderment.

Algy flew up to one of the higher points on the headland, so that he could get a better view to the east. Although this would be a dangerously exposed spot in a gale, it provided a very pleasant perch on a fine day, although it was never entirely free from the wind. But the view was impressive; it was possible to see for at least 40 miles in most directions, and sometimes even further. The sea and the sky were so exceedingly blue that Algy found himself humming one of his favourite old songs:

Algy hopes that a beautiful day full of joy is waiting for all of you :)))

[Algy is humming part of Beyond the Blue Horizon, a song by Leo Robin, Richard A. Whiting and W. Franke Harling, which was introduced by Jeanette McDonald in the 1930 Ernst Lubitsch musical film Monte Carlo.]