The tide had receded even further, and the creel boats were leaning listlessly against one another, high and dry. Algy thought it would be fascinating to see the parts of the boats which were usually underwater, so he flew back to the fishermen’s pier and found a convenient perch on a strange object which was suspended against the side of the wharf. The boats looked surprisingly large close to; they towered above him, blocking out the bright sunlight and throwing deep black shadows onto the exposed sea bed. Standing beside the further boat, almost lost in the shadows, a friendly human was very busy doing something mysterious to the underneath of his vessel. Looking up for a moment, he greeted Algy kindly, remarking that it was a fine day, and when Algy returned the greeting and gazed at the boat above the man’s head, he noticed that it had an unusual name, which may be of interest to fans of C. S. Lewis’s Narnia stories…

When he had had a good long rest, Algy hopped up onto the edge of the boat and perched there looking at the spectacle of the harbour at low tide. Bunches of stranded seaweed trailed from all the ropes which were secured to the harbour walls, and the beached boats listed aimlessly to one side, as though they were not feeling quite well, deserted by the sea. The tide was still running out, and the surface of the sea bed shimmered with a thin coating of water that had not quite drained away, and possibly never would…

It was St. Andrew’s Day, so Algy forgot about his crowdfunding activities for a while, and flew up to the highest point on the headland with his wee saltire under his wing. He erected the tiny flag on a cairn of stones which some visitors had constructed over the years, and there he perched, on top of the world, singing Scotland the Brave at the top of his voice…

Algy wishes all the people of Scotland, at home and abroad, a very Happy St. Andrew’s Day :-)) 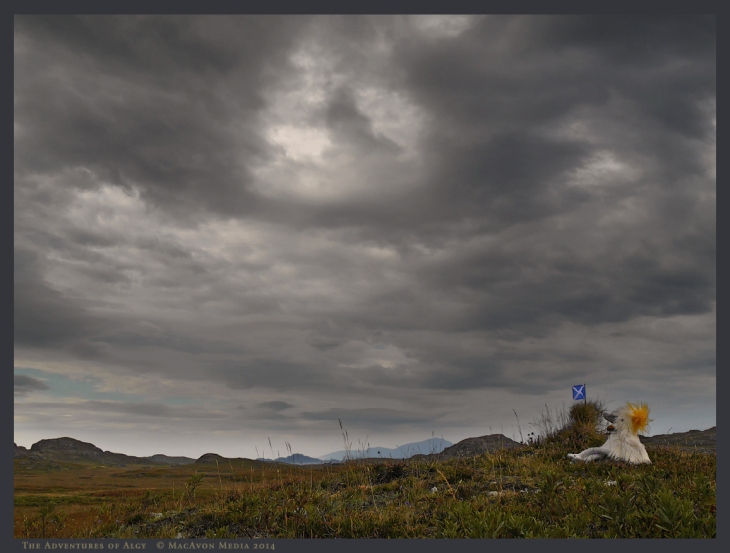 There were storm clouds brewing overhead at the start of the week in which the people of Scotland will vote in a historic referendum to decide whether or not Scotland will become an independent state.

Algy flew down to the peat bogs, beneath the heavy sky, and erected his wee Saltire on a prominent tussock. As he gazed at the gathering clouds, he wondered what the future would hold for all his friends in Scotland, and he remembered a famous poem:

What makes a nation’s pillars high
And its foundations strong?
What makes it mighty to defy
The foes that round it throng?

It is not gold. Its kingdoms grand
Go down in battle shock;
Its shafts are laid on sinking sand,
Not on abiding rock.

Is it the sword? Ask the red dust
Of empires passed away;
The blood has turned their stones to rust,
Their glory to decay.

And is it pride? Ah, that bright crown
Has seemed to nations sweet;
But God has struck its luster down
In ashes at his feet.

Not gold but only men can make
A people great and strong;
Men who for truth and honor’s sake
Stand fast and suffer long.

Brave men who work while others sleep,
Who dare while others fly…
They build a nation’s pillars deep
And lift them to the sky.

On St. Andrew’s Day, Algy woke at dawn and flew up into a patch of early morning sun at the top of his tree, to wave his saltire and sing his rendition of Scotland’s unofficial national anthem to the other West Highland birds:

Flower of Scotland was written in the 1960s by Roy Williamson of The Corries. Listen to this original recording of the song performed by The Corries themselves back in 1968. The video quality is poor, but the sound is fine. The Corries first met and started performing while they were students at Edinburgh College of Art 🙂