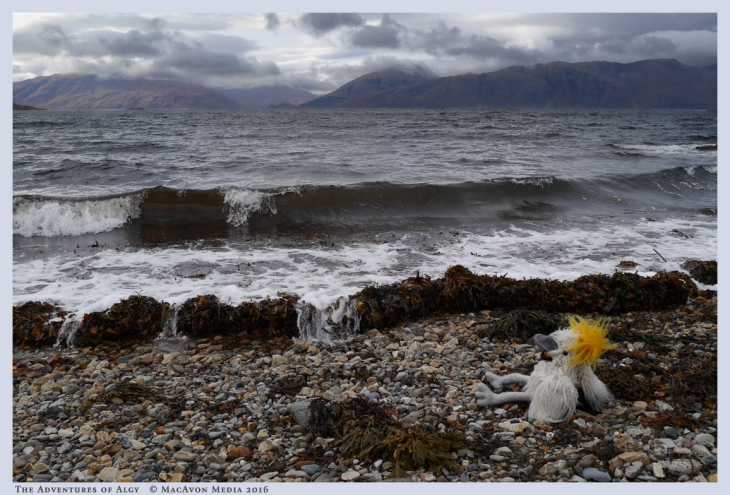 The weather was wild and unpredictable, and Algy had flown inland to escape the worst of the coming storm. As he approached the great sea loch he was caught by a sudden gust of wind and swept across the water to the further side. Landing on a slippery pebble beach strewn with seaweed, he perched uncomfortably on the damp stones and gazed at the moody water and the threatening sky. The great loch was behaving as though it were the ocean, with waves crashing on its shores, and he wondered how much more violent the breakers might be on his own beach, which faced the open sea…

When Algy woke up the next morning, he discovered that the scene had changed during the night. The clouds had descended from the sky, and crept silently down the mountains into the loch. Everything was quiet and muffled in the mist, except for the occasional shrieking calls of the oystercatchers. Algy moved along the beach until he found a slightly more comfortable area, where the pebbles were fewer and scattered over a bed of very coarse brown sand. Resting there for a while, he noticed that there was now a pretty wee island floating right in the middle of the loch. He wondered whether it had been there the day before; one could never be quite sure about these things in the strange West Highland mists…

Algy moved a wee bit closer to the edge of the water. The pebble beach was both knobbly and slippery, and not at all well adapted to the needs of a fluffy bird, but the beautiful silvery light was mesmerizing, and for a while Algy forgot about the discomfort of his tail feathers as he gazed out down the length of the loch. 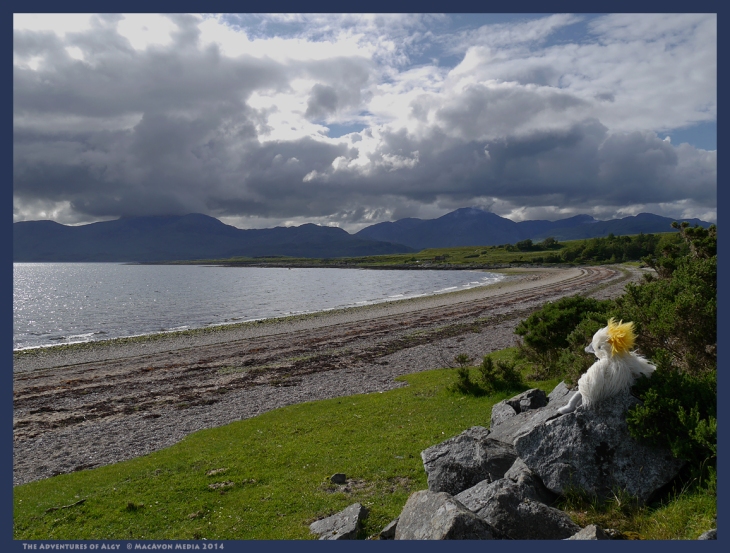 So Algy set off from his home and flew for many hours, until he reached the shores of the great sea loch. There he sought out one of the narrower stretches, as he was not very keen on crossing salt water, and flew across quickly, without looking down. He paused for a wee while on the further side, then turned towards the south, and started to follow the course of the great loch as it made its way towards the ocean. After a while he spotted a strange beach, which looked like a good place to rest. It was not at all like his own beach of fine white Hebridean shell sand, but covered instead with brown pebbles of various sizes; at the back of the beach there was a mass of gorse bushes instead of the sand dunes and Marram grass he was used to. However, it provided plenty of cover, and seemed like a reasonable place to break his journey. As he perched on a boulder and looked out at the loch, he was reminded of the opening of Walt Whitman’s famous poem, although he wasn’t exactly “afoot”, and his road was more silvery-grey than brown…

Afoot and light-hearted I take to the open road,
Healthy, free, the world before me,
The long brown path before me leading wherever I choose.

Henceforth I ask not good-fortune, I myself am good-fortune,
Henceforth I whimper no more, postpone no more, need nothing,
Done with indoor complaints, libraries, querulous criticisms,
Strong and content I travel the open road.

[Algy is quoting the opening of the poem Song of the Open Road by the 19th century American poet Walt Whitman.]