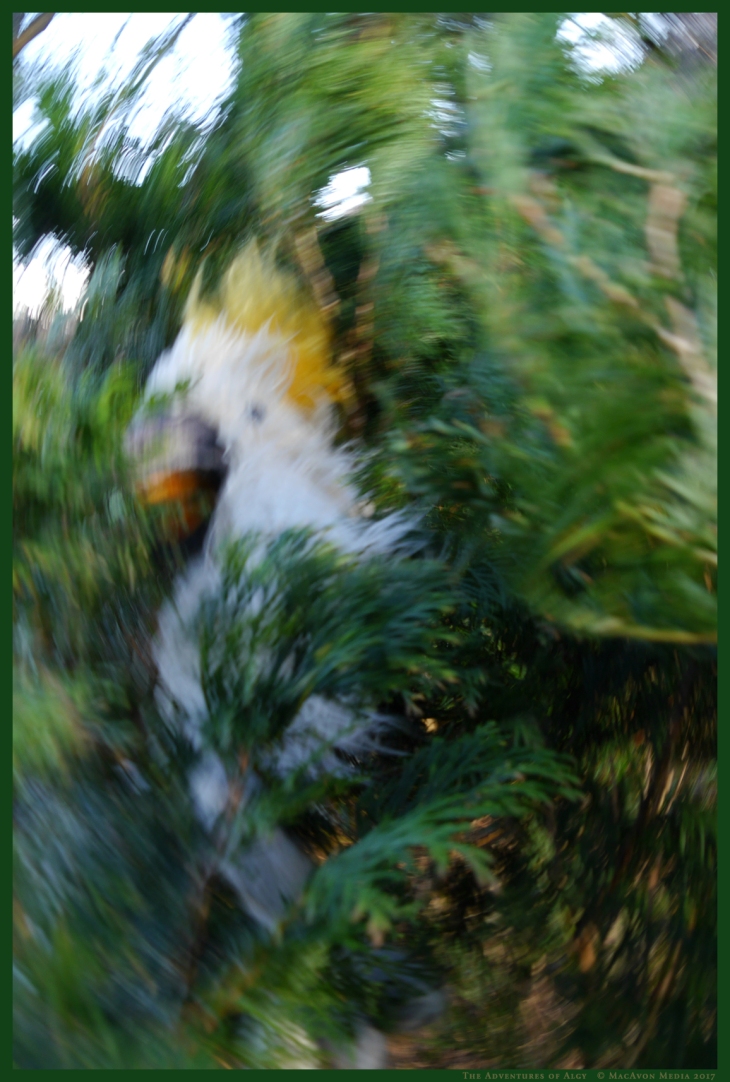 And a few minutes later, Algy knew for sure that he should have retreated to the safety of his assistant’s house…

The northerly gale continued to roar across the Scottish Higlands, straight out of the arctic, bringing frequent biting showers of hurtling snow and icy hail. Algy took cover in an evergreen cypress hedge, but it only afforded a modicum of protection, and as his assistant took his photograph, Algy’s reproachful gaze reminded her that possibly a fluffy bird would rather be snuggled up with his fluffy friends in a nice warm place on such a day, instead of being obliged to pose for photos in the teeth of the gale…

The wind had died down and the world was still again – at least, for the time being…

Algy found himself a snug perch in the crook of an old oak tree, where a comfortably broad branch was covered with a soft cushion of lichen and moss. Although the day was dull and grey, Algy was feeling in excellent spirits in the calm that followed the storm, so he decided to recite a selection of light verse for the benefit of anyone who might happen to pass by on the old track below. He commenced with this edifying rhyme:

Be kind and tender to the Frog,
And do not call him names,
As ‘Slimy skin,’ or ‘Polly-wog,’
Or likewise ‘Ugly James,’
Or ‘Gape-a-grin,’ or ‘Toad-gone-wrong,’
Or ‘Billy Bandy-knees’:
The Frog is justly sensitive
To epithets like these.
No animal will more repay
A treatment kind and fair;
At least so lonely people say
Who keep a frog (and, by the way,
They are extremely rare).

This post is a contribution to “No Edit Friday”, run each week by Algy’s hardworking friends at PWS photosworthseeing 🙂

[Algy is quoting the poem The Frog by the 20th century Anglo-French writer Hilaire Belloc.]