Algy perched near the top of a tall spruce tree in the wee wood, and gazed at the moon as she sank down through the spiky branches. He wondered whether – if he flew fast enough – he could catch her before she fell behind the dark hill beyond the trees… 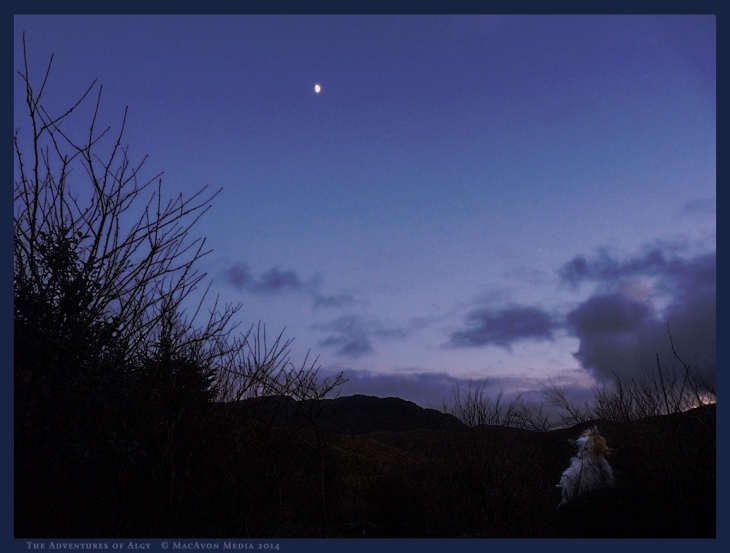 When darkness fell the sky cleared for a while, and a bright half moon emerged from the clouds. Algy perched in a bush on the edge of the peat bogs and gazed at the sky, dreaming idly of all the exciting adventures he was planning. As he watched the moon rise high over the peat bogs, Algy remembered a funny little poem he had once read:

The moon came late to a lonesome bog,
And there sat Goggleky Gluck, the frog.
‘My stars!’ she cried, and veiled her face,
‘What very grand people they have in this place!’

Although he was exhausted after his exertions on the beach, Algy found it very difficult to get to sleep. A beautiful full moon was dancing in and out of the clouds, and the wind was racing through the Marram grass. Every time he began to drop off he was awakened by the moonlight in his eyes or the roar of the gale. So Algy decided to enjoy the nuit blanche, and moved to a more comfortable spot on the dunes where he could lie back and watch the moon waltz across the sky. He was reminded of a poem by Emily Dickinson:

[Algy is quoting the poem The Moon was but a Chin of Gold by Emily Dickinson.]

At this time of year the nights are light, and Algy finds it difficult to sleep. There was a beautiful crescent moon sinking down behind the ridge, so Algy found a perch in his tree and watched the moon set. It reminded him of a haiku by Yosa Buson, the Japanese master:

The short night –
Broken, in the shallows,
A crescent moon.

Algy had spent a long afternoon composing ditties. The moon was beginning to climb in the sky as the last of the evening sun lit up the ridge, but Algy wasn’t watching. He balanced his rhyming dictionary rather precariously among the branches and sat lost in reverie, wondering whether he really could rhyme  ‘orange’ with ‘challenge’ as the book suggested.