Algy flew onwards to the shores of the quiet loch, which, owing to the bitter March wind, was a wee bit less calm than usual. He tucked himself down among the masses of dead bracken beside the shore, trying to ignore the spikes of the numerous bramble stems which wound their way mercilessly through the dry fronds. It was a fine morning, and the loch was unusually blue, but the colours surrounding it were still those of winter, with not a hint of green in sight. Algy wondered how long it would be before the landscape was transformed once again by the touch of spring… 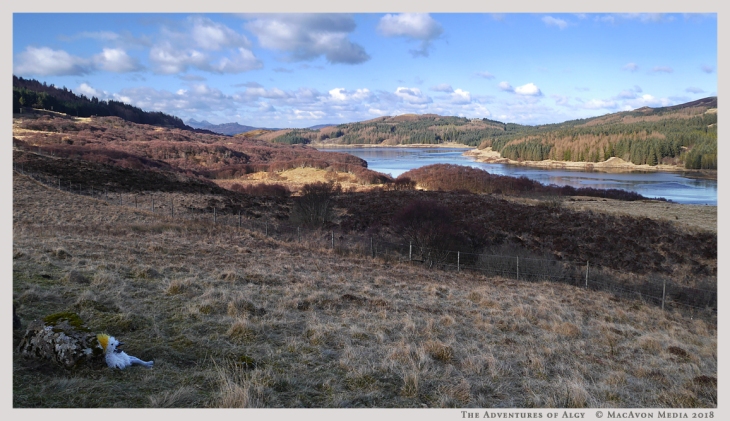 Algy flew over to a spot on the hillside above the deep freshwater loch which lay across the centre of the peninsula, half way between the ocean and the Sound. He was surprised to see that much of the loch’s surface was frozen, despite the sunshine which was warming some of the landscape though not, unfortunately, the place in which he had stopped to rest. The world seemed divided between bleak, freezing shadow and bright, colourful light, and Algy hoped that the bitter wind that was whistling through his feathers would move the clouds along hastily, so that the sun could bring him a wee bit of comfort too.

Algy flew over to a low rock, to escape the incoming tide, and gazed up at the sky. The storm clouds seemed to be reaching down towards him with many dark, wispy fingers, as though they wanted to snatch him up and carry him away. Clutching the rock tightly, he wondered whether it might be safer to retreat inland until the storm had passed…

Algy hopes that if you are threatened by storms this weekend, you will be able to find a safe place to shelter until the skies clear again 🙂

The weather was wild and unpredictable, and Algy had flown inland to escape the worst of the coming storm. As he approached the great sea loch he was caught by a sudden gust of wind and swept across the water to the further side. Landing on a slippery pebble beach strewn with seaweed, he perched uncomfortably on the damp stones and gazed at the moody water and the threatening sky. The great loch was behaving as though it were the ocean, with waves crashing on its shores, and he wondered how much more violent the breakers might be on his own beach, which faced the open sea…

Algy perched on a large rock beside the quiet loch and watched the dark clouds scudding fast across the sky. It was clear that he would soon be drenched again, but for the moment a rare burst of sunshine was providing some much needed light and a wee bit of comforting warmth. The autumn was advancing rapidly, and the damp leaves and grasses were glowing with their last bright colours before the fall. Not that leaves often had a chance to fall naturally in the wild west Highlands of Scotland; more likely, they would be all be gone with the wind, when the next Atlantic storm blew in…

Somewhere on the hillside behind him, a robin was quietly warbling its autumn song, and as Algy listened to its sweet notes he was reminded of another song, by Canon Dixon:

The feathers of the willow
Are half of them grown yellow
Above the swelling stream;
And ragged are the bushes,
And rusty now the rushes,
And wild the clouded gleam.

The thistle now is older,
His stalks begin to moulder,
His head is white as snow;
The branches all are barer,
The linnet’s song is rarer,
The robin pipeth low.

[Algy is quoting The Feathers of the Willow by the 19th century English cleric and poet, Canon Richard Watson Dixon.]

Algy is a collector of diamonds. Not those brash, unyielding, expensive rocks, once said to be “a girl’s best friend”, which human beings seem to value so highly, and for which some even risk their lives or their fortunes, but those far more precious and ephemeral gems which dance across the water of Scottish seas and lochs when the sun infuses them with life. Of course, Algy cannot collect them literally, as they elude even the most skilful and persistent captor, but he stores them in his mind, so that their brilliance can illuminate even the darkest days which may lie ahead. A creature with a head full of treasures such as these is rich indeed 🙂 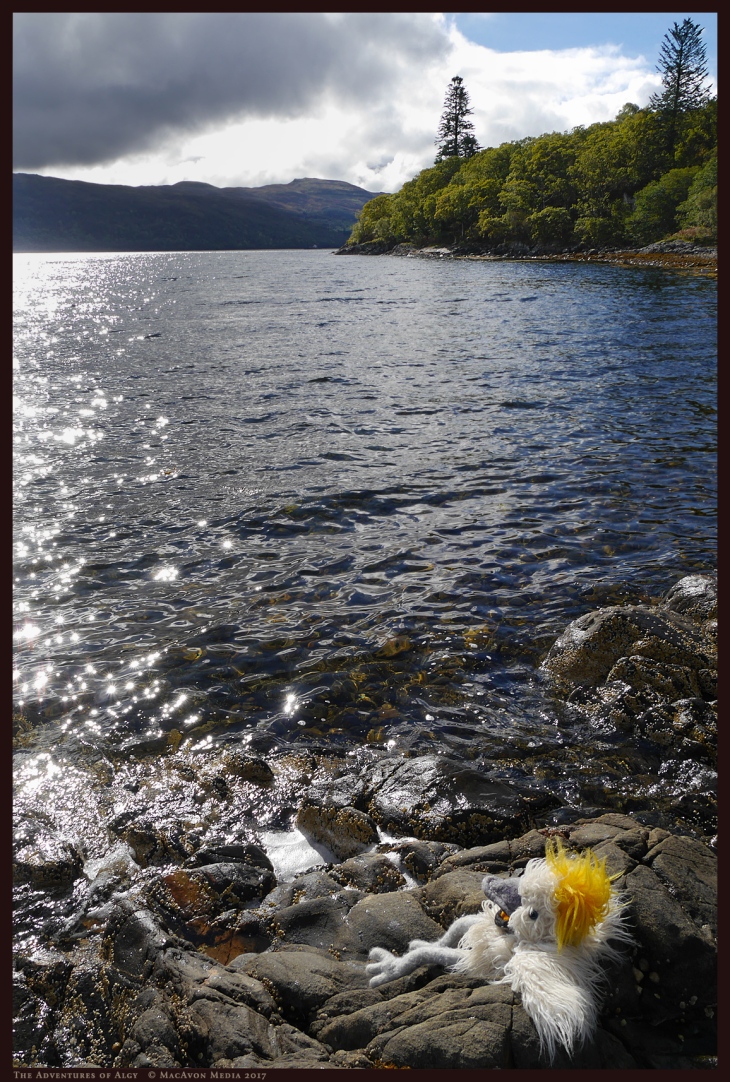 Some days it rained all day without a break, and some days the rain paused for a while, to rest and recuperate. On those days there were occasional bursts of light while the clouds regrouped, and it was often possible to see the dividing line between the monochrome world and the full colour version. Algy was intrigued by these changes, and watched in fascination as the clouds and rain wiped the colour out of the landscape, and then short spells of sunshine restored it.

Algy hopes you will all have a happy and relaxing weekend, whether it is in monochrome or in colour 🙂

[ This photo has not been altered to create the divide 🙂 ]

The West Highland weather was taking a walk on the wild side, but at times it paused to rest and reflect. When Algy was sure that the wind had dropped down to a tolerable level for a wee while, he flew over to the sheltered silver loch and perched on a rock. It was calm and peaceful there, and the lap lap lap of the tiny waves soothed him like a gentle lullaby. Although Algy loved the untamed ocean and the pounding of the breakers close to his home, it was undeniably pleasant to be able to relax for a while in a softer, more serene environment… 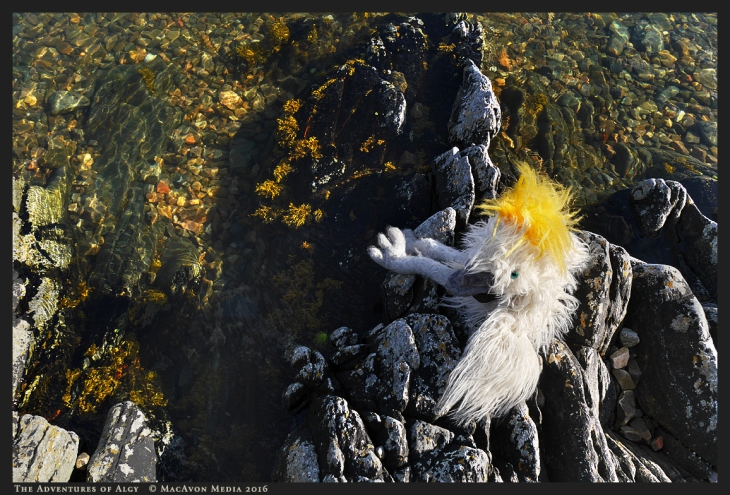 Algy perched on a rock beside the loch and gazed at the coloured seaweed and the pebbles which lay just beneath the surface of the clear, shallow water. As he watched the ripples swirl lazily around the rock, he was thinking of his friend Jonathan, who was trying to recover from a very serious operation. Jonathan has always been very kind to Algy and his assistant, and supports the Adventures of Algy by selling books, prints and greetings cards in his wee village shop. So Algy said a special fluffy bird prayer for his friend, and sent him and his family a lot of very fluffy hugs xoxo

It was a beautiful afternoon for a change and Algy felt in need of some sunshine, so he left the lush green of the shady woodlands around the lochan, and flew a little way down the quiet loch to a pebble beach that he knew. Reclining on a rock beside the water, he watched the patterns of the ripples and the passage of the clouds, which were reflected beautifully in the calm surface of the sea loch, and created ever-changing shadows on the hillsides. It was a fine, peaceful, summer’s afternoon, and would have been quite perfect if it were not for that curse of the West Highland summer, the tiny creature known as a midge…