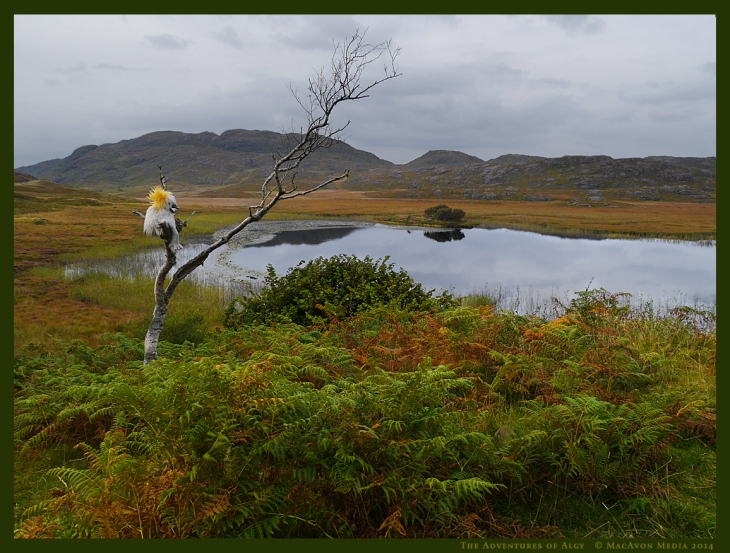 Just like most “mornings after”, the day following the Scottish Independence Referendum dawned grey and dreich. There was scarcely a breath of wind on the moor, nor any sign of sun in the sky, and Algy was feeling decidedly limp. He draped himself over the remains of a blasted rowan tree, and gazed for some time at the calm water of the lochan. As he perched there in the stillness, watching nothing very much happening at all, he remembered a poem, which he dedicates to all his Scottish friends who are feeling disappointed and depressed today:

Hold fast to dreams
For if dreams die
Life is a broken-winged bird
That cannot fly.

Hold fast to dreams
For when dreams go
Life is a barren field
Frozen with snow.

Soft spring rain was falling gently on the beach, and on the tidal pools among the seaweed and rocks. Algy was delighted to see the wee circles and ripples that appeared and vanished again as each raindrop touched the water, so he perched close to a large, shallow pool, where he could watch more closely. He was so much occupied in studying the patterns that he really didn’t notice that his feathers were getting increasingly soggy and damp… Algy just loved the rain when it fell softly, so as the drops fell onto the pool, he quietly chanted one of his favourite poems to them:

Algy hopes that if raindrops are falling on you too, you won’t be angry with them, but will let them kiss you :)) xoxo 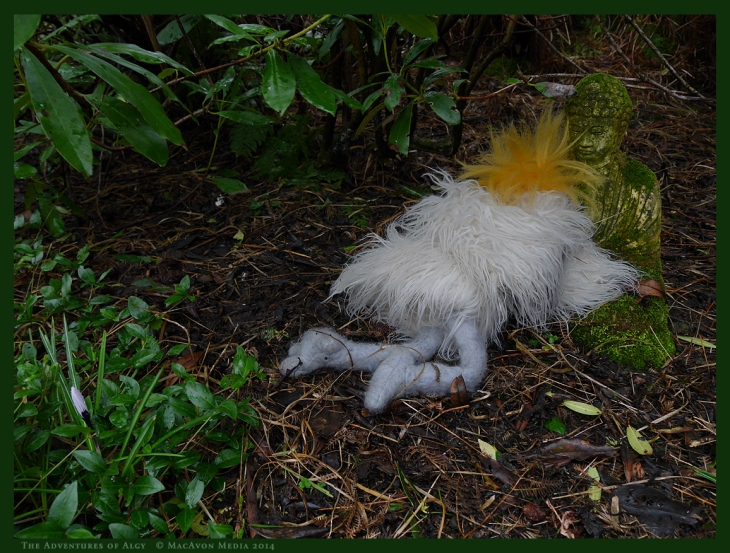 It had been a very long and extraordinarily exciting day, and – like so many people who give parties – Algy found that he had tired much more rapidly than his guests. So, while they were still singing at the tops of their voices and doing crazy dances to the infinitely repetitive Surfin’ Bird, Algy slipped away quietly and found himself a secluded corner in the garden, where he could tuck his head under his wing and sleep. As he closed his eyes he thought of all his amazing Tumblr friends, who had done so much to make his Tumblr birthday party a wonderful success, and he remembered a poem by Langston Hughes, which he dedicates to you:

Bring me all of your dreams,
You dreamer,
Bring me all your
Heart melodies
That I may wrap them
In a blue cloud-cloth
Away from the too-rough fingers
Of the world.

Postscript: to those who have suggested otherwise, Algy assures you that he himself drinks nothing but fruit juices and water – the whisky was strictly for his guests 🙂)

The West Highland summer had returned to normal, and everything was really very wet, including Algy. He tucked himself in tight against the trunk of his tree and let the rain beat upon his head and sing him a lullaby:

And I love the rain.