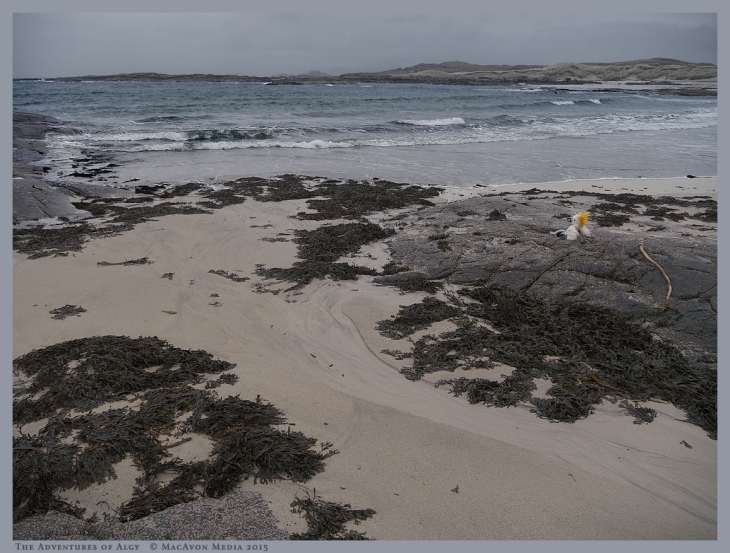 Algy leaned back on a flat rock, staring out at the sea. The wind was howling through his feathers again, and much of the time it was raining. It seemed as though there had been nothing but grey skies, wind, and rain, sleet or hail for months and months and months, and he wondered whether it would ever stop. Although the West Highlands was notorious for such weather, there were usually some periods of calm and sunshine; Algy could not remember such a persistently stormy winter before. As he gazed out into the west, he remembered the opening verse of a poem:

I seem to lie with drooping eyes,
Dreaming sweet dreams,
Half longings and half memories,
In woods where streams
With trembling shades and whirling gleams,
Many and bright,
In song and light,
Are ever, ever flowing;
While the wind, if we list to the rustling grass,
Which numbers his footsteps as they pass,
Seems scarcely to be blowing;
And the far-heard voice of Spring,
From sunny slopes comes wandering,
Calling the violets from the sleep,
That bound them under snow-drifts deep,
To open their childlike, asking eyes
On the new summer’s paradise,
And mingled with the gurgling waters –
As the dreamy witchery
Of Acheloüs’ silver-voiced daughters
Rose and fell with the heaving sea,
Whose great heart swelled with ecstasy –
The song of many a floating bird,
Winding through the rifted trees,
Is dreamily half-heard –
A sister stream of melodies
Rippled by the flutterings
Of rapture-quivered wings.

Algy dedicates this post to all his friends who feel that they are caught in a winter that will never end, whether they are buried in snow, or battered by constant gales and rain xoxoxo

[ Algy is quoting the first verse of the poem Music by the 19th century American poet James Russell Lowell. ]