Algy perched in a wild rose bush and gazed at the pretty flowers, which surrounded him with a delicate but lovely perfume in the cool, damp mist.

Many terrible things had been happening in Britain recently, as well as in other parts of the world, and although Algy’s home is far removed from the places in which they occurred, Algy had been as much affected by all the dreadful news as everyone else. So he bowed his head quietly and said a fluffy bird prayer for all the poor people caught up in the horror of the fires, terrorism, and acts of violence and war, both at home and abroad, and he sends everyone lots of very special extra fluffy hugs today xoxoxo

The local landscape was on fire again, so Algy spent the day anxiously firewatching. Despite the high rainfall at most times of year, the West Highland moorland is often tinder dry in early spring, and the traditional crofting practice of “muir burn” quickly gets out of hand.

Some of his friends may remember the serious hill fire around Algy’s home last year, which caused Algy to keep watch all night while the sky burned and then thank the firefighters in April 2012. 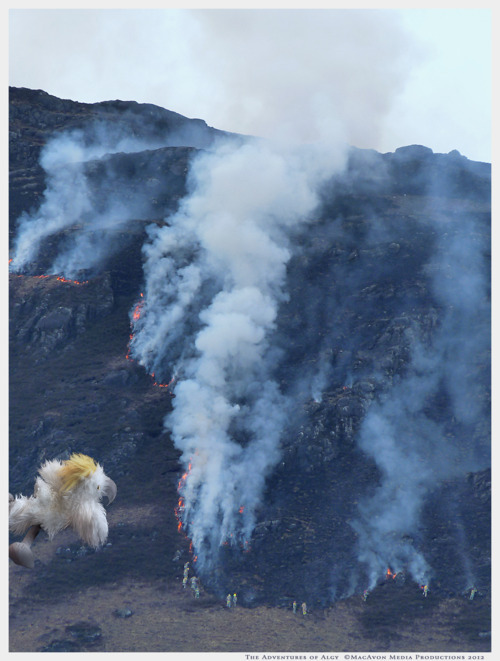 During the night, the fire crossed over the rocky ridge and started to sweep across the moorland near Algy’s home. But the firefighters battled on, and by the early afternoon of the second day the flames were nearly extinguished. Algy flew over to thank the firefighters, as they beat out the very last line of fire.

The hill was on fire again, for the third time this Spring, but this time it was burning ferociously. Algy kept watch through the night, while the firefighters beat their way stoically across the other side of the steep ridge.

The fire was so fierce,
So red, so gray, so yellow
That, along with the land,
It burned part of the sky
Which stayed black in that corner
For years

[From A Small Story about the Sky by Alberto Ríos.]