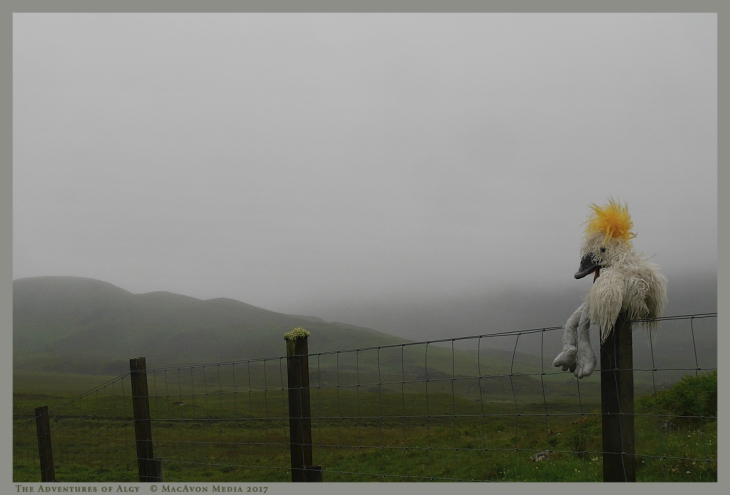 For days and days and days – that felt like weeks and months and years – the dense Scotch mist had smothered the West Highlands of Scotland with a dark and exceedingly thick wet blanket. Algy had heard a distant rumour that this would be the hottest, sunniest weekend of the year to date… in the UK…

So, in the middle of the afternoon, in the middle of the year, Algy perched on a dripping fence post and studied the moss growing on top of the post in front of him. As most of the world had vanished, it was almost all he could see, but he was glad to discover that at least some things seemed to thrive in these conditions…

Flaming June, they call it. 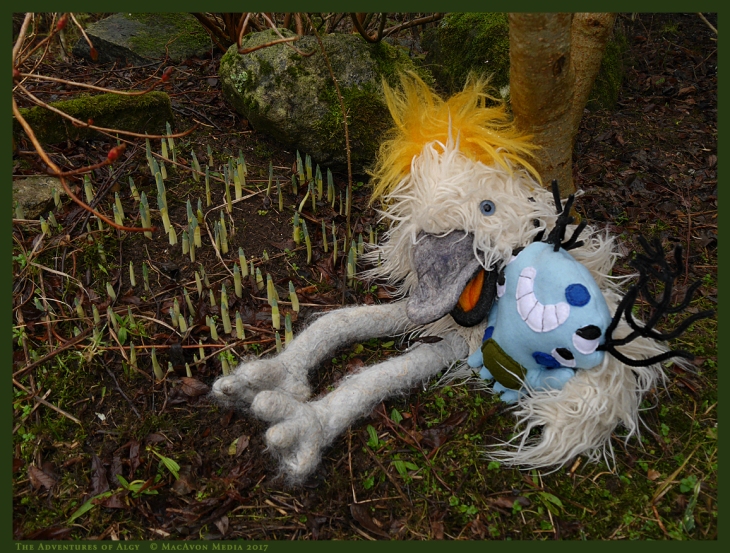 When Algy woke the next morning, he found that the Scotch mist had descended again, and it was even darker and gloomier than before, and exceedingly damp.

The forecasters were saying that a big storm was on its way, but for the moment it was calm, although very dreich and dismal. Algy decided that in conditions such as these, more hugs were needed, so he took his little blue monster out to see the daffodils emerging from the ground, and gave it a great big fluffy hug 🙂

Have you hugged your monster today? Algy sends lots of extra fluffy hugs to all those who may be in need of extra hugs today xoxo

Algy’s monster was sent to him by @monster-hugs some years ago, and travelled thousands of miles around the world, just to keep him company and give him someone extra to hug 🙂

It was another dreich February day. The land was hazy with Scotch mist driving in off the sea with considerable force, and the wind was howling across the top of the moor like an angry beast – but it was possible to find a calmer spot if you knew where to look. Algy discovered a damp but comfortable perch on a tree hanging low over a burn which had carved its way down the hillside, creating shelter for those who clung to its banks. Algy felt chilled and exceedingly damp, but the sounds of the water running beneath him were soothing…

Listen to the sounds of this burn tumbling down the hillside in the Scotch mist.

Although it was almost midsummer the sky was entirely grey, and it was a cold, dreich day. It did nothing but rain a slow, persistent sort of dreary drizzle the entire day. So Algy decided that the best thing to do was take a very long bath in his favourite puddle.

(A few of Algy’s perennial followers may have seen him bathe in this puddle before, but Algy hopes that you won’t mind seeing his bath time again.)