Algy woke up with a start, and realised why he had been dreaming of a soft sea foam blanket covering his legs… 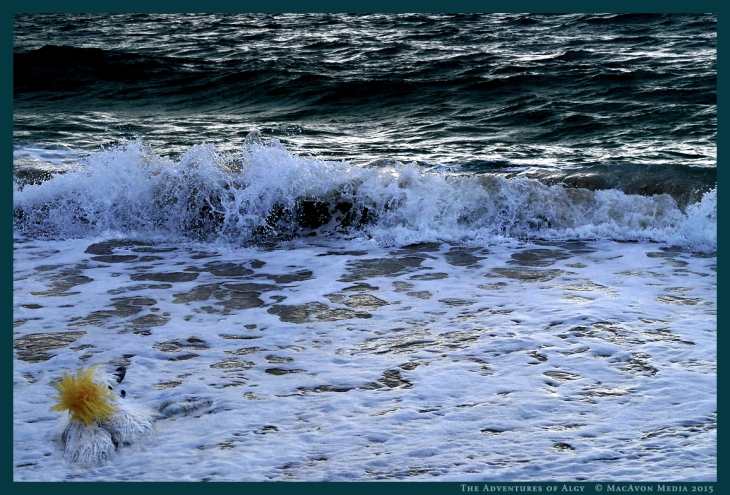 Algy slept on through the moonlit night, and now he dreamed that he was sitting in the surf as the waves rolled in from the ocean, watching the breakers dance on the shore in an endless procession as they gently covered his legs with a soft, white blanket of salty sea foam…

Before long, the repetitive sound of the waves pounding on the shore and the rustling of the wet sand being sucked back into the sea put Algy to sleep. And as he slept, the full moon rose up from behind the ridge and bathed the whole world in a cold blue light – and Algy dreamed that the waves grew brighter and brighter, and splashed higher and higher, until they started to wash right over him…

It had been a very long and extraordinarily exciting day, and – like so many people who give parties – Algy found that he had tired much more rapidly than his guests. So, while they were still singing at the tops of their voices and doing crazy dances to the infinitely repetitive Surfin’ Bird, Algy slipped away quietly and found himself a secluded corner in the garden, where he could tuck his head under his wing and sleep. As he closed his eyes he thought of all his amazing Tumblr friends, who had done so much to make his Tumblr birthday party a wonderful success, and he remembered a poem by Langston Hughes, which he dedicates to you:

Bring me all of your dreams,
You dreamer,
Bring me all your
Heart melodies
That I may wrap them
In a blue cloud-cloth
Away from the too-rough fingers
Of the world.

Postscript: to those who have suggested otherwise, Algy assures you that he himself drinks nothing but fruit juices and water – the whisky was strictly for his guests 🙂)

Long, long ago, and very far away, young Algy was perching on the rocks of a southern shore, dozing in the warm evening sunshine. As he gazed sleepily out to sea, he dreamed of a little girl on the other side of the world who loved fluffy animals and birds more than anything else except stories, and who would one day grow up to tell the tales of his adventures to the people of the future…

Many years passed… and then, one day, Algy received messages in his Tumblr mailbox from his friends nosealviewing, babalou71 and josepha-amarantine, all of which read: “THROWBACK THURSDAY: Find an old picture of yourself and post it up in this ask then pass this on to the next 10 blogs on your dash.”

Well, Algy couldn’t quite do exactly what was asked, as he had no assistant to take his picture in those long-ago days. But he hopes that maybe this will go some way towards satisfying the requirements of his friends – even though it’s no longer Thursday 🙂

Algy discovered that being cold and wet all day is exceedingly tiring, so as soon as the sleety snow had stopped falling he made himself a comfortable nest among the dead bracken stalks and immediately dropped off to sleep. And as he dozed fitfully among the chilly patches of bright, white snow on the open hillside, he dreamed that he was sitting in a beautiful cherry tree, alive with the dancing white petals of spring… 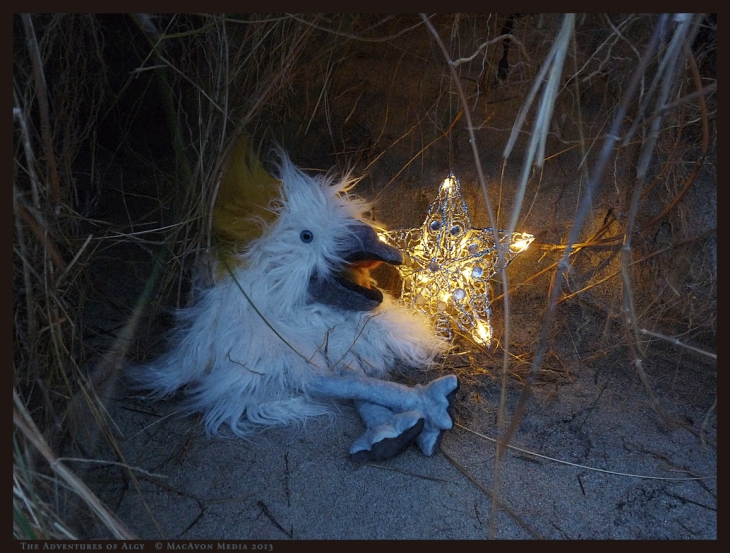 As night fell the storm grew stronger and Algy retreated deeper into his hollow in the sand dunes. The wind shrieked and howled outside, and the waves roared as they surged up the beach, so Algy could only doze fitfully at best. Half asleep and half awake, a song he had once heard – Come Down ma Evenin’ Star – kept running through his head, and he dreamed that a glowing star fell into his tiny sand cave, to keep him company and brighten up the darkness of the stormy night.

[Listen to the version of the song which Algy remembered, sung by the lovely Alice Faye in the 1940 film Lillian Russell.]

It was a cold, dark and exceedingly wet December day in the West Highlands, so Algy tucked himself into the dripping branches of his tree and dreamed wistfully of an island in the sun …

Algy thanks Joe Shlabotnik for the use of his photo.