It was a particularly fine afternoon, so Algy flew over to one of his favourite viewpoints. On a day as clear as this, it was possible to see for 40 miles or more in three directions from this spot. In the east lay the mauve mountains of the mainland, to the north lay the impressive Isle of Skye, and in the west lay the beautiful islands of the Hebrides. Algy gazed at the idyllic view, and – reflecting on the fact that it was Armistice Day – he remembered an old sonnet:

The upland shepherd, as reclined he lies
On the soft turf that clothes the mountain brow,
Marks the bright sea-line mingling with the skies;
Or from his course celestial, sinking slow,
The summer-sun in purple radiance low,
Blaze on the western waters; the wide scene
Magnificent, and tranquil, seems to spread
Even o’er the rustic’s breast a joy serene,
When, like dark plague-spots by the demons shed,
Charged deep with death, upon the waves, far seen,
Move the war-freighted ships; and fierce and red,
Flash their destructive fires – The mangled dead
And dying victims then pollute the flood.
Ah, thus man spoils Heaven’s glorious works with blood! 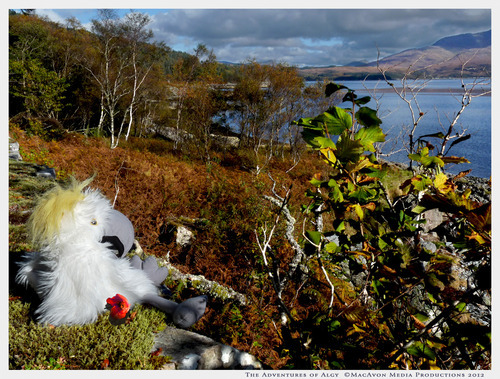 On Remembrance Day, Algy perched on a low stone wall by the loch and thought sadly of the terrible damage done to the world and its creatures by war.

He quietly hummed An Eala Bhàn – The White Swan – a haunting Gaelic song with lyrics written by a poet from the island of North Uist while in the trenches of WWI during the Battle of the Somme in 1916.

Listen to this lovely version of An Eala Bhàn sung by North Uist’s own Julie Fowlis.