It was the last day of March, and after a dismally grey week the sun had finally decided to shine and the sky had turned a brilliant blue… just for one day…

Algy felt full of the joys of spring, even though the temperature in the clear, fresh air was just a few degrees above freezing. He fluttered about excitedly from tree to tree, looking at all the fresh new buds emerging and listening to the other birds chattering happily around him; everything was coming back to life once again… High overhead in the bright blue sky a skylark was singing a glorious song, and very soon Algy started to sing out loud too, albeit not quite so melodiously as his wonderfully tuneful friend above…

It was spring at last. Algy’s home in the wild West Highlands was still being blasted by an icy wind carrying battering showers of rain mixed with hail or sleet, but it was undoubtedly spring at last, and there were times between the showers when the sky turned blue and the bright new flowers revelled in the sunshine.

Algy loved the early spring because there were so many flowers which shared his own sunny colours. Waiting for an auspicious moment when the wind seemed to have dropped to a tolerable level for a wee while and the clouds had dispersed, temporarily at least, he settled himself into a sunny forsythia bush and thought of a poem he had once read… and of you, all his friends around the world…

You said, take a few dry
sticks, cut the ends slantwise
to let in water, stick them
in the old silver cup on the
dresser in the spare room and
wait for the touch of Easter.
But a cold wave protected the
snow, and the sap’s pulse beat
so low underground I felt no
answer in myself except silence.
You said, winter breaks out in
flowers for the faithful and
today when I opened the door
the dry sticks spoke in little
yellow stars and I thought
of you.

[Algy is quoting the poem Forsythia by the 20th century American poet and philosopher, James Hearst.] 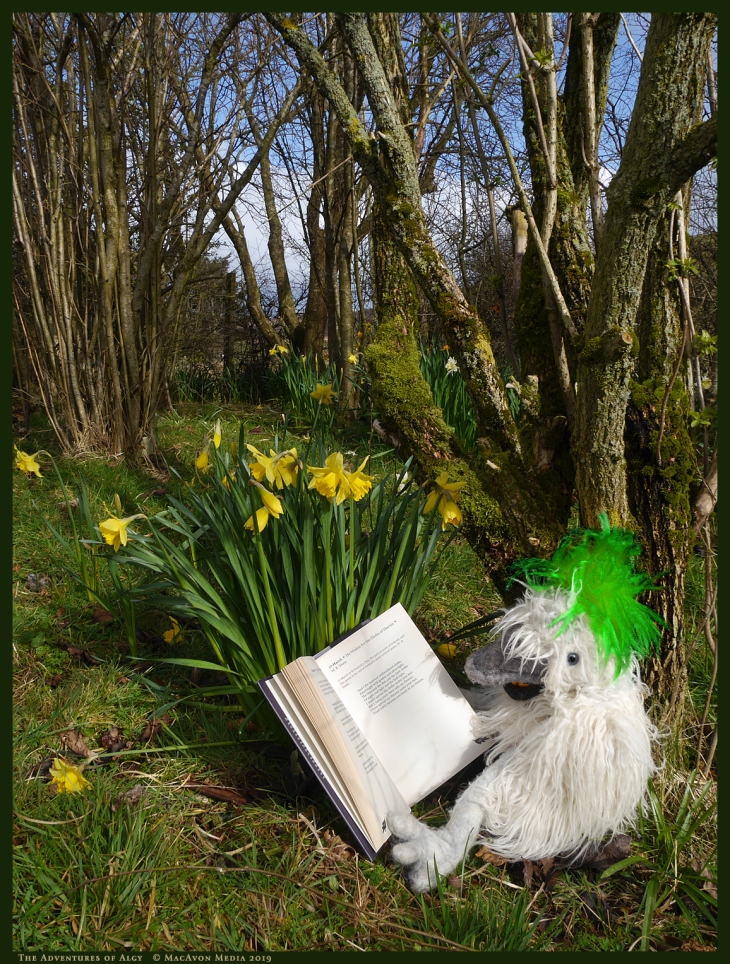 It was St. Patrick’s Day, and although the weather was very rough at times, with heavy showers of sleet and hail racing in across the sea on massive black clouds from the frozen north, there were at least some moments when the sky cleared and the sun decided to shine.

Wating for one of these sunny intervals, Algy managed to settle himself down for a few minutes in the most sheltered spot he could find, with his back pressed firmly against the mossy trunk of an old elder bush. Opening one of his many books of poetry he read the entry for 17th March:

Had I the heavens’ embroidered cloths,
Enwrought with golden and silver light,
The blue and the dim and the dark cloths
Of night and light and the half-light,
I would spread the cloths under your feet:
But I, being poor, have only my dreams;
I have spread my dreams under your feet;
Tread softly because you tread on my dreams.

Happy St. Patrick’s Day everyone! Algy hopes you will follow his example, and dye your hair bright green, as he does every year on this day ☘️

[Algy is reading the poem He Wishes for the Cloths of Heaven by the late 19th/early 20th centurey Irish poet William Butler Yeats.]

Although it was the middle of March, nasty cold wet sleet was falling with a persistence and determination guaranteed to dampen the spirits of even the hardiest inhabitant of the wild west Highlands, and yet Algy was undismayed. In fact, he was feeling positively cheerful, because his assistant, who had been unwell for several months and unable to record his adventures, had at last recovered sufficiently to assist him.

Trying not to shiver, Algy perched in a dripping young larch tree, listening to a song thrush nearby, who was evidently feeling equally happy as he belted out his defiance of the dismal weather at the very top of his voice. As he turned towards his assistant, Algy shook the icy water off his feathers, and smiled his sunniest smile…

Algy hopes to be able to continue his adventures more regularly now, albeit not daily, and would be delighted if you could join him as he shares his experiences in the wild wet Highlands of Scotland once again.

In the meantime, Algy sends you all his very fluffiest hugs, and his warmest thanks to all the kind friends who wished him a Happy Birthday a few days ago. Algy loves you all xoxo

May 6, 2018 Posted in Hebrides, Isle of Mull, Scotland, The Adventures of AlgyFormat Post format: ImageLeave a comment 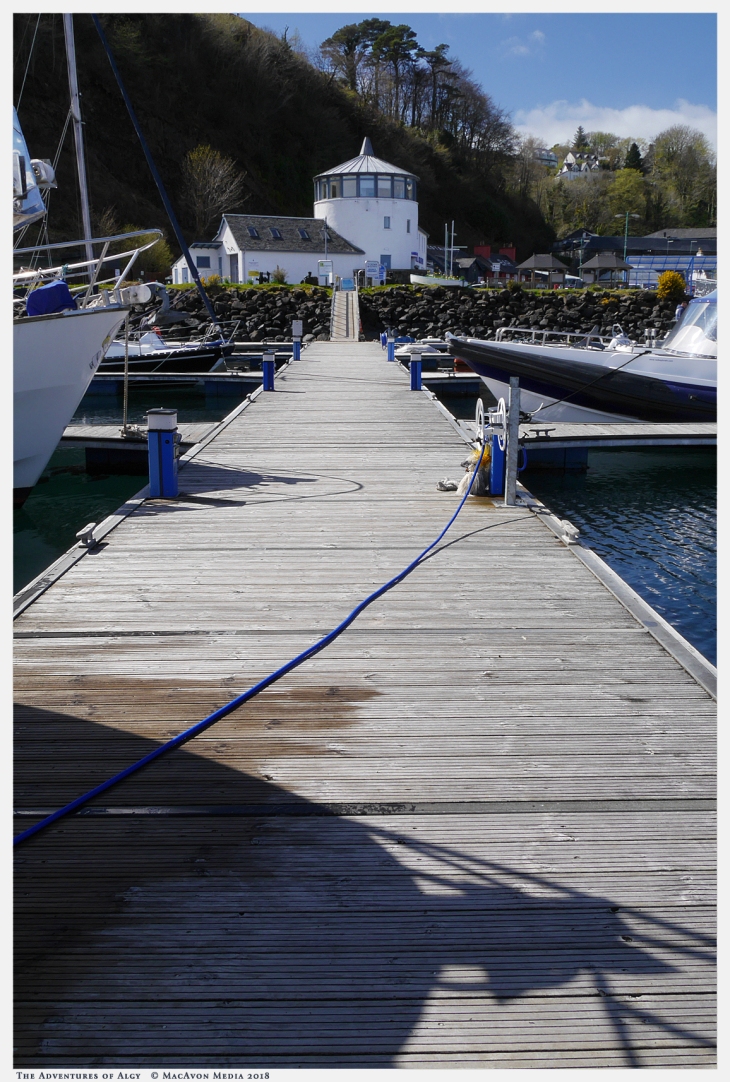 The harbour environment was both fascinating and enjoyable to visit, but Algy was feeling a wee bit homesick, and from the other side of the bay he could hear the strange beeping and clanking sounds the transport vessel made as it approached the land. If he wanted to return home, now was the time to leave… Leaning back against another odd object on the floating platform for just a few moments longer, Algy took a last look at the many different boats and the picturesque harbour, and wondered when he would see them again…

May 5, 2018 Posted in Hebrides, Isle of Mull, Scotland, The Adventures of AlgyFormat Post format: ImageLeave a comment

Algy searched around for a more comfortable perch, and spotted one that not only looked inviting but which would obviously provide extra advantages should he have the misfortune to be suddenly swept into the sea. Tucking himself in cosily, he put his feet up and leaned back in the sunshine, trying to ignore the bitter wind which ruffled his feathers. It was a splendid day for shadows, and as he admired the fine shadow beside him, he thought of a wee poem he had read, and smiled:

Algy hopes that you will all have a relaxing and happy weekend, and that every time you race your shadow you will win 😀

May 1, 2018May 1, 2018 Posted in Isle of Mull, Scotland, sea, The Adventures of AlgyFormat Post format: ImageLeave a comment

Turning his back very firmly on the ghost ship, Algy sought a new perch in a safer spot. The combination of the strange floating platform which the humans walked upon and their small, sea-going vessels, which were tied up neatly to the structure here and there, made an unusual and fascinating environment for a fluffy bird, and Algy was happy just to perch in the sun for a while, looking at the boats and admiring his own shadow. One kind human who happened to pass by invited Algy to join him on his boat, but Algy shyly declined, as he had not been formally introduced to the stranger and was not at all sure what to say to him…

Suddenly, Algy noticed that the din of human voices which he had heard from the other side of the bay had ceased; all was silent, except the creaking of the boats as they swayed against the strange floating structure he was perching upon. Puzzled, Algy flew a wee bit closer. The tall ship appeared to be deserted now, which seemed odd; he hadn’t noticed the humans moving away, and he had seen them bustling about all over it just a short time ago. The clouds were moving swiftly across the sky, creating ever changing patterns of shadow and light, and for a moment the sun illuminated the name which was painted on the side of the boat. Algy gasped and shuddered, then quickly turned away, and pretended to be gazing at something fascinating across the bay, in the opposite direction. The opening lines of a long poem came into his mind… “Long time ago, from Amsterdam a vessel sailed away…” he thought, and then remembered the end of the famous tale:

Once more the lurid light gleamed out, – the ship was still at rest,
The crew were standing at their posts; with arms across his breast
Still stood the captain on the poop, but bent and crouching now
He bowed beneath that flat dread, and o’er his swarthy brow
Swept lines of anguish, as if he a thousand years of pain
Had lived and suffered. Then across the heaving, sullen main
The tempest shrieked triumphant, and the angry waters hissed
Their vengeful hate against the toy they oftentimes had kissed.
And ever through the midnight storm that hapless crew must speed;
They try to round the Stormy Cape, but never can succeed.
And oft when gales are wildest, and the lightning’s vivid sheen
Flashes back the ocean’s anger, still the Phantom Ship is seen
Ever heading to the southward in the fierce tornado’s swoop,
With her ghostly crew and canvas, and her captain on the poop,
Unrelenting, unforgiven; and ’t is said that every word
Of his blasphemous defiance still upon the gale is heard!
But heaven help the luckless ones to whom the sight appears, –
The doom of those is sealed near whom the ghastly sailor steers;
They’ll never reach their destined port,—they’ll see their homes no more, –
They who see the Flying Dutchman – never, never reach the shore!

Algy wishes you all a very happy time this weekend, and hopes that you will not encounter any doomed ghosts… 😀

[Algy is quoting the first line and the final stanza of the poem The Flying Dutchman by the 19th century Irish poet and journalist, John Boyle O’Reilly.]

While Algy was waiting patiently on the slipway, watching the transport contraption approach slowly but steadily across the sea, he heard the sound of excited human voices carrying across the water from the other side of the bay. Looking round, he noticed an unusual vessel, apparently motionless beside the strange structures which he had seen in that area of the harbour some time before. Forgetting all about the ferry boat for the moment, he decided to fly over to investigate. As he approached, Algy could see that there were several humans clustered round the vessel, and more of them actually upon it, so he thought it might be prudent to observe from a safe distance, just in case fluffy birds were not welcome. Landing on the end of one of the odd platforms which projected out into the bay, he perched on the flat, colourful surface. Although the wind bit him viciously as it whistled through his feathers, the surface itself felt comfortingly warm in the spring sunshine, but he was surprised to find that it seemed to bob up and down with the motion of the sea, which was a wee bit disconcerting, although not too seriously alarming as the weather was more or less calm, and the water seemed to stay firmly in its place…

Algy was sitting quietly on the uncomfortable perch within the peculiar shelter, trying to get comfortable, when all of a sudden he heard a gentle thrumming noise. He listened carefully, and decided that it was definitely growing louder. Could it be the transport vessel coming to collect him at last? In great excitement he jumped up, flew out of the shelter, and down towards the bottom of the slipway… and there it was, approaching slowly from around the bend which hid the coastline of the island from view. Algy sat down on the edge of the slipway and leaned back on the hard and rather knobbly surface, waiting and watching, watching and waiting, as the ferry boat gradually increased in size…