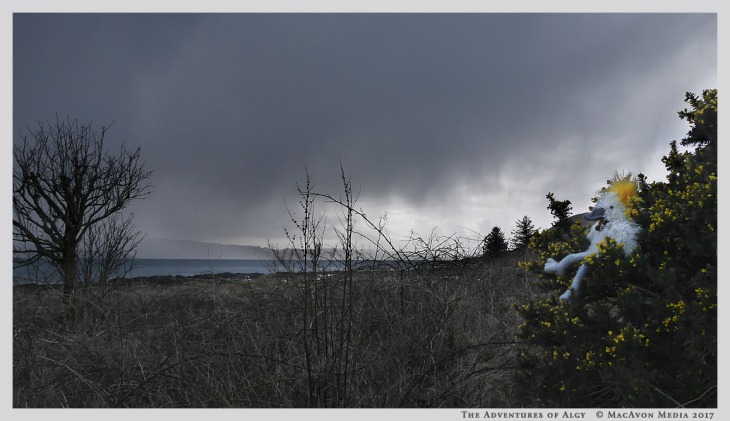 Algy flew down to the Sound and perched in a gorse bush already covered in February gold. It was a stormy day, with rapidly alternating phases of darkness and light, and many heavy showers were sweeping in along the Sound from the open ocean. Algy was thinking of some of his friends, who were threatened by dark storm clouds in their own lives, and as he watched the next wave of clouds approach he sang one of his favourite “songs” for them:

The human soul
is like water:
it comes from heaven,
it rises to heaven,
and again it must descend to earth
in an eternal alternation.

Listen to this beautiful recording of Gesang der Geister über den Wassern in a setting by Schubert, performed by the Vienna Vocalists and the String Ensemble of the Vienna Philharmonic Orchestra.

[Algy is singing part of Gesang der Geister über den Wassern (The Song of the Spirit over the Waters) by the late 18th/early 19th century German writer Johann Wolfgang von Goethe. You can read the full text of the poem in German and English, but Algy feels that the English translation given there does not do full justice to the original.]