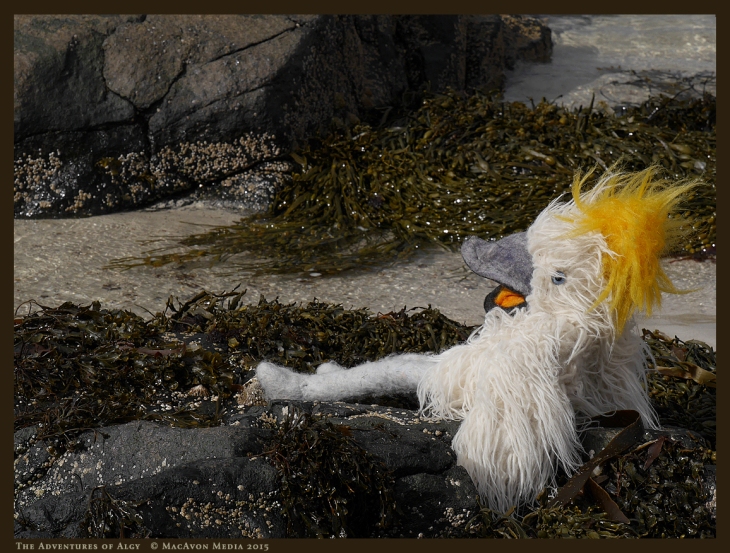 Although there was a little watery sunshine in the early morning, the massive clouds rapidly descended, and Algy knew that the rest of the day would be wet again. He leaned back on the damp seaweed as the soft drizzle started, watching the ebb and flow of the water around the rocks and singing to the rain. He was singing his own setting of a poem by Shelley, and wishing that at least some of the rain clouds would blow around the world to visit his friends in those places where the rain was so badly needed:

I bring fresh showers for the thirsting flowers,
From the seas and the streams;
I bear light shade for the leaves when laid
In their noonday dreams.
From my wings are shaken the dews that waken
The sweet buds every one,
When rocked to rest on their mother’s breast,
As she dances about the sun.
I wield the flail of the lashing hail,
And whiten the green plains under,
And then again I dissolve it in rain,
And laugh as I pass in thunder.

I sift the snow on the mountains below,
And their great pines groan aghast;
And all the night ‘tis my pillow white,
While I sleep in the arms of the blast.
Sublime on the towers of my skiey bowers,
Lightning my pilot sits;
In a cavern under is fettered the thunder,
It struggles and howls at fits;
Over earth and ocean, with gentle motion,
This pilot is guiding me,
Lured by the love of the genii that move
In the depths of the purple sea;
Over the rills, and the crags, and the hills,
Over the lakes and the plains,
Wherever he dream, under mountain or stream,
The Spirit he loves remains;
And I all the while bask in Heaven’s blue smile,
Whilst he is dissolving in rains.

Algy hopes that you all have a wonderful Sunday, and that those who need rain will receive some of his! xoxo

[Algy is singing the first two verses of The Cloud by the early 19th century English poet Percy Bysshe Shelley. ]