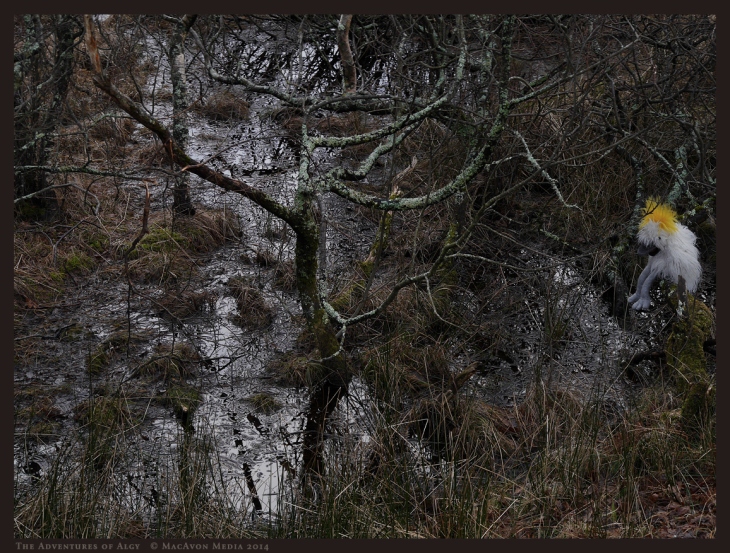 Some parts of the peat bog were considerably wetter than others, and in places it reminded Algy so much of his friend Monica’s Louisiana swamp that he kept a wary eye open for alligators… just in case! Algy had never met an alligator, and he had a feeling that perhaps he would really rather not.

As Algy perched on a low, rotten branch which had tumbled across the marsh, he was thinking especially of his friend Fern in California, thousands of miles away. He wanted to make his friend smile, so – realising that his luminous hair probably stood out like “a fiery spark” against the “vast and gloomy dark” of the peat bog in the same way as the Dong’s nose in the forest – Algy began to recite slowly, in his most ominous voice:

When awful darkness and silence reign
Over the great Gromboolian plain,
Through the long, long wintry nights; —
When the angry breakers roar
As they beat on the rocky shore; —
When Storm-clouds brood on the towering heights
Of the Hills of the Chankly Bore: —

Then, through the vast and gloomy dark,
There moves what seems a fiery spark,
A lonely spark with silvery rays
Piercing the coal-black night, —
A Meteor strange and bright: —
Hither and thither the vision strays,
A single lurid light.

Slowly it wanders, — pauses, — creeps, —
Anon it sparkles, — flashes and leaps;
And ever as onward it gleaming goes
A light on the Bong-tree stems it throws.
And those who watch at that midnight hour
From Hall or Terrace, or lofty Tower,
Cry, as the wild light passes along, —
“The Dong! — the Dong!
"The wandering Dong through the forest goes!
"The Dong! the Dong!
"The Dong with a luminous Nose!”

[Algy is reciting the first three verses of The Dong with a Luminous Nose by Edward Lear.]